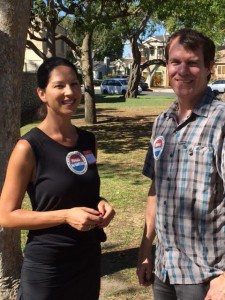 November is coming sooner than it might seem, and the race for the Culver City School Board has all three declared candidates starting their campaigns with “kickoff’ events.

The team campaign for the board moved forward on September 13, 2015 when candidates Scott McVarish and Anne Burke (pictured left) hosted a “Kickball Kickoff” fundraiser at the picnic area at Lindberg Park. With several dozen supporters in attendance, the crowd enjoyed Mexican food while listening to the candidates give some informal speeches on their campaign focus.

Burke, recently returned from her stint as a chaperone on the El Marino Language School trip to Mexico said that seeing the kids using their Spanish in daily interactions has re-convinced her of the value of language immersion. “This is the kind of education we want our kids to have – something that makes life better, and opens up the ability to communicate with more people. We need to continue to grow our immersion programs, and offer this to all the students who want this.”

McVarish spoke of his vision for expanding the ‘academy system’ as currently exemplified by the Academy for the Visual and Performing Arts at CCHS. “We want to create more academies, so that we can offer this same concentration to students who want manual arts and the kind of solid education that is focused on employment and careers for people not headed for college.”

Requests for precinct walkers and fundraisers kept the crowd in with the goals of the campaign, and the presence of several current school board members seemed to point to continuity and connection.

A game of kickball was the highlight of the event, with the political picnickers being joined by a boy scout troop and others from the lawn at Lindberg Park.

This coming weekend will see the campaign launch of school board candidate Kelly Kent on Sunday, September 20, from 4 pm to 7 pm,  in Culver City’s Rancho Higuera neighborhood.  A respected neuroscientist, Dr. Kent’s campaign slogan is A Brain for Education.

After earning a neuroscience doctorate from USC, Dr. Kent co-founded adaptED Consultants, where she provides brain-based professional training for teachers, parent education, and student enrichment. She is also a professor of psychology at Antioch University, and a professor of neuroscience at Moorpark College.

Throughout her daughter’s tenure at Linwood Howe Elementary, Dr. Kent has been an active volunteer. She was instrumental in founding and implementing a free, before-school Spanish language instruction program, administered and taught entirely by volunteers. Additionally, Dr. Kent has served as a Culver City Parks, Recreation and Community Services Commissioner for the past year. All voters and volunteers interested in learning about Dr. Kent’s visions for the school board are encouraged to attend.  The campaign kickoff is organized for adults only, (there will be no childcare available on site) and parking is limited, so walking or biking is encouraged.

November is coming sooner than you might think, and taking the time now to get to know the candidates, ask questions and get involved with CCUSD can provide long term benefits for you, you family and your community.