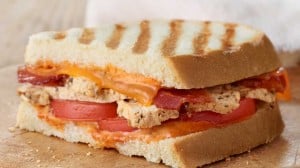 Panera Bread and Chipotle Grill top the list of companies eliminating antibiotics from the meat they serve, while Starbucks and Subway were among the fast-food purveyors drawing failing grades in a report card issued Tuesday by a handful of advocacy groups. Having a clear public policy with timelines and specific commitments largely separated the winners and losers on the first of what is expected to be an annual ranking.

Subway’s F grade came largely because the company did not offer public details of any program and did not respond to the survey. Media reports have said Subway would begin addressing the issue of antibiotic use in raising chickens by next year.

“Saying that you’re going to try to do something is different than committing to doing something,” said Dr. David Wallinga, senior health officer for the Natural Resources Defense Council, one of the groups that prepared the report card.

Likewise, Starbucks earned an F grade because it did not respond to the questionnaire and has not offered a detailed plan, according to the report card. The Seattle-based coffee chain in 2009 announced a “buying preference” for suppliers that use “industry best practices” in animal husbandry and the processing of dairy and eggs. Last year, it expanded its policies to address issues such as hormone use, dehorning, tail docking, castration and the use of gestation crates.

“Even though we purchase a limited amount of meat, we are working with our suppliers to address concerns about antibiotic use and are looking to collaborate with others across our industry and in the NGO community to promote best practices on this issue,” Starbucks said in a statement.

The scorecard awarded points for the quality of the antibiotics program, its implementation and the transparency of the company about its policy. A “good” program included a ban on the use of any antibiotics for disease prevention or growth promotion, or a ban on antibiotics considered important for human health.

The use of antibiotics in the meat and poultry industry has been highlighted as a contributing factor to the growth of pathogens that are resistant to such drugs.

In response to concern from the medical establishment and consumers, large companies that supply meat have announced a variety of plans to eliminate the routine use of antibiotics. Chicken processors including Tyson Foods, Perdue Farms, Pilgrim’s Pride Corp. and Foster Farms have outlined such programs in the last several years.

Even with that trend, Chick-Fil-A scored only a B rating, largely because it did not appear to offer a policy on hormones and growth promoters, and did not offer organic or grass-fed menu choices, according to the report.

Panera Bread and Chipotle Grill, both of which earned A grades, won points for detailed, publicly available plans that include timetables — although both lost points for not offering organic meat choices, the report noted.

“Some of the companies have incredible amounts of detail on their website. They’re very clear about what they’re going to do and when,” Wallinga said. “Companies like Chipotle and Panera, their policy isn’t limited to one type of meat.”

The study was co-authored by Friends of the Earth and included input from the Food Animal Concerns Trust, Keep Antibiotics Working, Consumers Union and the Center for Food Safety. It rated the top 25 sellers of fast food.

Only five of those 25 earned grades of C or better — Dunkin Donuts and McDonald’s rounded out the top five with C grades. The rest received F grades, including 13 companies that were awarded no points because they apparently have no publicly available antibiotics policy and did not respond to the 10-question survey. Just answering the survey earned three points of a total of 34 in a system that was heavily weighted toward the quality and breadth of policy.

The advocacy groups said they hope to make the ranking an annual affair and to expand it beyond the 25 companies.