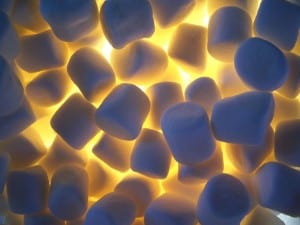 “There’s a time to be soft,” my Weight Watchers leader cited. Up to that moment, nothing said at the meeting had appealed to me. I had begun to tune out, as I often do in large group discussions. I’ve been within the requisite two pounds of goal weight for over a year, but I could use every new inspiration I can get because I’m dangerously close to the top end of my comfortable weight range. The softness thing struck a chord; maybe softness is the answer! I’ve spent a life of fighting for what I’ve wanted; nothing’s fallen easily into my lap. It’s made me a tough cookie, but tough isn’t the best kind of cookie; the best kind are a little crispy around the edges, but chewy and pliable on the inside.

Many of us live to eat, in order to soothe savage beasts that lurk inside us. I finally began to lose weight around the time I started writing this column, and I attribute the ability to control my eating to be akin with controlling words on “paper.” Being softer doesn’t seem to jive well with writing. When I’m “soft,” I don’t seem to be able to write as much. Is there a correlation between slaying internal beasts with a pen instead of a fork? Calmer people don’t seem to have as strident opinions; to write you need to be filled with a few ounces of “piss and vinegar.” So here’s me debating the prospect of being a kinder and gentler me.

I’ve been trying “soft” on for size over the past few weeks here and there. I’m on a journey to grasp how it might feel to be more passive than passive-aggressive or, as I’ve been called, aggressive-aggressive. I am trying to end emails with only my first name. This was suggested by a colleague as a way to make my written missives sound softer. Secondly, a friend pointed out that I may have lost an opportunity to make a new friend when I was observed loudly denouncing a third party. I hope that I’ve learned from that mistake; I can’t stop with the denouncing, but I realize I should restrict my denouncements to only among people who might know and care. Speaking loudly to a group may well be a teacher’s occupational hazard, but I’ll try harder to talk without using my hands to make a point. Maybe if I wait a breath before I speak…these are all “softness” techniques that the real people seem able to master.

If I change my strident black and white stripes, what’ll be the payoff, though? A ton of new namby-pamby “friends” in my life? The promotion I want, for a job that’s not even posted? Indeed, softness training may help me in future interviews, but I could end up “in drerd” (look up the Yiddish) before I get that chance. Reputations preceding their owners, I might be able to put on soft airs well enough, but people can see through my thin-veiled later of soft.

I do understand why my Weight Watchers leader introduced this subject. She’s not out to make us change radically, she’s just encouraging us to be receptive to change, and merely to give softness a chance. I see so many friends mired in their curmudgeonly ways, and I just want to beg them to do the George Costanza. George ordered a different sandwich at the diner one day, and everything in his life changed like dominos.

To learn how to be a little softer, I may have to get a little more comfortable with allowing people to dump their frustrations on me, and be a better listener. I also have to become more patient with less-than-optimum customer service. On a trip to 1980’s Communist China, I remember people saying, “I’m doing my best,” instead of actually doing their best. A softer person is tolerant of people who work at a slower pace, and is a nice, Buddha-Like listener, it seems.

I felt a little wistful when I heard the words, “maybe you want to try out what it’s like to be a softer person every once in a while.” I got home and immediately e-mailed one of my ex-friends, a member of the rank and file I’ve informed, after growing up past 50, that I’d never speak to again – this was someone I’d “x’d” out of my life for a perceived transgression. I had seen the individual recently again, and realized they might not be as horrific a human being as I’d thought. To demonstrate my new-found softness, I wrote, “maybe I was too hard on you.” I’m not sure how my apology was received, but, this I do know: like grief, apologies are more for the givers than the receivers.

In a final act of softness, I enjoyed the heck out of my “Labor Day Dance Away” contra dance retreat last weekend. I allowed myself to enjoy it by not breaking my neck to brave holiday weekend traffic in order arrive exactly at the start of the camp. Ever so softly meandering there at a leisurely pace, I stopped along the way when and where I felt like doing so. I made the weekend NOT be about the dance, but instead about the enjoyment of other aspects: camaraderie, communal eating, yoga sessions where I could be calm and quiet for an hour, beautiful scenery, a crossword puzzle with a friend, a refreshing pool, shopping, and generally being away from “it all.”

In many forms of dance, there are “lead” and “follow” roles that are anachronistically referred to as, “ladies” and “gents” or “female” and “male” roles. Advanced dancers are fond of switching so-called “gender” roles as an enrichment activity. Switching roles fluidly is a softening, a metaphor for love of change, and is an homage to seeing things from a different perspective every once in a while, and as often as possible.