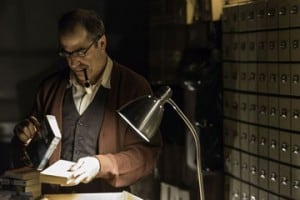 At the end of “The Object Lesson,” the remarkable theatrical masterwork that opens this season at the Kirk Douglas Theater, the woman sitting next to me turned and said “This is in my top five theater experiences, ever.” I speechlessly shook my head in agreement, and she corrected herself. “No, top three.”

I had already fallen – in love and in awe – with Geoff Sobelle at the performance of ‘all wear bowlers,’ with the collective Rainpan43. Physical comedy as precise as ballet, with a sense of lunacy so rich and sweet it could be served as dessert. In “The Object Lesson”  Sobelle takes the space to open into the reflections that fill our everyday lives, and the stuff we surround ourselves with.

The first character in the show is the set. The KDT is transformed into an echoing storage space packed 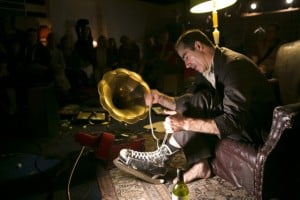 quite to the rafters with card board boxes, shabby furniture, and utterly random items like skateboards, viking helmets, records and books. The center of the set is dominated by a vast library card catalogue, as precise as it is inexplicable. A drawer marked Buttons was filled with buttons – that makes sense – and a drawer marked Dirt was filled with dirt – which does follow the same line of logic, but doesn’t make sense at all.

The audience is invited to inspect the set, and while noticing that there are no actual theater seats, discover that there are beach chairs, director’s chairs, a few old sofas, and plenty of boxes marked SEAT. But the next discovery was that there was no audience – people were pulled into the action throughout, to hold a prop, assist with a movement,  even to become a major character (loud applause to Jeremy Greene for her role as the love interest.) There’s a lesson for everyone.

To say more would be to deprive you of your own pleasure of discovery.  It might even make your top three.

For tickets, got to www.centertheatregroup.org

Right now would be good. Someone is going to have to pack all this stuff up after Oct. 4.