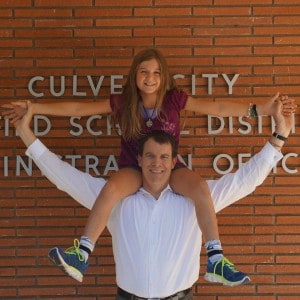 Almost 60 parents, PTA & UPPC leaders, city councilmen and school board members, residents and supporters dropped by Anne Burke and Scott McVarish’s campaign kick-off today held after CicLAvia. Burke and McVarish are running as a team for Culver City school board. The election is set for November 3, 2015. Mike “Mr. Culver City” Cohen hosted the event with school board member Laura Chardiet introducing the candidates and City Councilman Jim Clarke making the pitch to donate to Burke and McVarish’s campaign.

Burke was the first candidate to speak and shared how she relates to many of the families who have never had anyone attend college and the challenges they face navigating this system. “I’m a first-generation college student in my family and I understand the challenges quite personally. We have a lot of these potential first-generation college students in Culver City. We have to figure out as a system how we help them meet this challenge.” She also focused on the students who may not be choosing college directly out of high school: “we need to be creative on how can we prep them to have a meaningful and successful and gainfully employed lives after they leave our school system.”

McVarish was the next candidate to share his thoughts on the district and his campaign. He asked 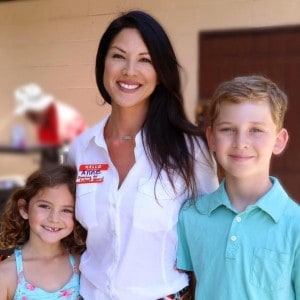 whether the schools are changing to match the massive and rapid changes that our society and economy are undergoing. “I don’t know if public schools are changing fast enough.” McVarish proposed the establishment of multiple career path academies at the secondary schools to help meet these changes. Building on the success of the performing arts academy, he informed the crowd he wanted to discuss with the other board members the creation of a Science, Technology, Engineering, Mathematics (STEM) Academy, a Industrial Arts/Trades Academy, and a Leadership Academy. McVarish recalled that he helped create the United Parents of Culver City because parents were not being listened to at that time. Now he said they are being listened to and they have helped usher in an amazing administrative team to go along with an excellent school board. He promised that he and Anne would work well with that team, with everyone putting students first and working towards the goal of great schools.

The field campaign kick-off is scheduled for September 13 at Lindbergh park and will feature a family picnic and games for the kids. The campaign is expecting 200 supporters to join them at this back-to-school party. Precinct walking for volunteers and yard sign distribution to supporters will begin that day.

For more information, visit: facebook.com/burkemcvarishforschoolboard2015 or www.ForGreatSchools.org or contact the campaign at [email protected]