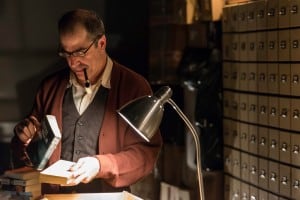 “The Object Lesson,” written and performed by Geoff Sobelle and directed by David Neumann, opens the Center Theatre Group’s 12th season at the Kirk Douglas Theatre, with previews for the West Coast premiere beginning September 4 and the opening set for September 9, 2015. Performances continue through October 4.

Actor-illusionist-inventor Sobelle (“all wear bowlers” and “Elephant Room”) returns to the Douglas and transforms the space into an epic storage facility of gargantuan proportion. Boxes are stacked to the ceiling and audiences are free to roam and poke through the clutter in this immersive theatrical installation that unpacks our relationship to everyday objects. Designer Steven Dufala uses some 3000 boxes for the installation and for audience seating. Hilarious and heartbreaking, “The Object Lesson” is a meditation on the stuff we cling to and the stuff we leave behind.