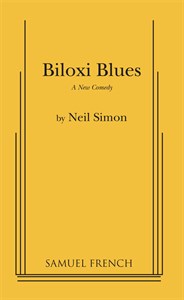 Neil Simon is a legendary, award-winning figure in American Theater.  His plays have been performed worldwide and adapted for film and television, as well as being translated into the language of sitcoms and other foreign tongues. “Brighton Beach Memoirs”, “Biloxi Blues” and “Broadway Bound” form a trilogy on mid-20th Century American life, crafted out of Simon’s early years as a kid, teenager, and young adult.

The two staged readings of “Biloxi Blues” were added at both theaters due to popular demand from audiences and members who wanted to see all three Eugene Trilogy plays in the chronological order they take place, showing Eugene’s life from his teenage years with his family in Brighton Beach during the height of the Depression in 1937, through his eye-opening stint in the Army during World War II, and ending with Eugene and his older brother Stanley returning to their family home after the war and attempting to break into the world of show business as professional comedy writers.

“Biloxi Blues” is set at an Army basic training camp in beautiful Biloxi, Mississippi in the dog days of summer 1943. Six raw, young recruits learn to BE ARMY and in the process learn more than they could have imagined about themselves, each other, and the war-torn world they are about to enter.  This hilarious coming-of-age story about a naïve Jewish boy from New York City has its darker moments as the young men in the unit are confronted with some of the more disconcerting realities of ethnicity, color, race, and religion of the time.  Listen to the amazing journey of Eugene Morris Jerome as he seeks to lose his innocence, fall in love, become a writer, and come home from World War II with all his body parts intact.

“Biloxi Blues” tickets are pay-what-you-can, with a suggested $5 donation per person.  Tickets will be sold at the door beginning one hour prior to each performance at the following locations and times:

For more information about the production at either location, please email [email protected].