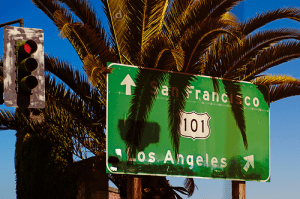 I’ve been commuting once a month to the San Francisco Bay Area for the past year. Plop, plop, fizz, fizz: first one son went there for college, and now the second one has ended up there, too. This summer, instead of coming home, they both had reasons to stay in the Bay. One lives in Berkeley and the other lives in Daly City, and has a job in downtown San Francisco. Traversing the highways and bridges to get from points A to Z, between sons, accommodations, dance events, visits with friends, I feel like I’ve gone a little native lately. Here now, with the whole family (both boys, as well as my sister’s family), our discourse often includes comparisons between California’s two great urban centers: Los Angeles and San Francisco.

It seems like it’s the same state, and it really IS the same state, but, it’s a different state of being entirely. It’s all so different: the people, the landscape, the immigration patterns, the politics, the architecture, the weather, the historical beginnings, the stores and businesses, the “the” in front of geographical neighborhoods (“The Haight,” “The Sunset”). I’m increasingly drawn here not only because a major part of my family is here, but because I like the differences I am discovering.

Los Angeles is Hollywood and Aerospace, here it is Gold Rush and Silicon Valley. San Francisco has been influenced by the European, the Asian and the LGBT, whereas Los Angeles has been influenced by the Latino, the African-American, and the Jewish. Nary a book store found in L.A., here, you find them on nearly every city block. And these are not sleepy, empty, struggling, book stores, but vibrant places filled with people and conversation. There are readings, performances, knowledgeable staff and proprietors, and patrons who come in thanking the owners for moving into their neighborhoods. The parks here are green and lush and unfenced. In L.A., the parks are flat and dry and often fenced.

I’ve noticed a few consistencies. As an often farblonjet (Yiddish for lost and confused) out-of-towner, I’m constantly trying to change lanes in weird places and gingerly navigating parallel parking on hills. What other drivers do here that doesn’t happen in L.A.: people actually brake for a minute and LET you do your thing. They don’t speed up so you can’t make your move, or honk at you. They hang back, wait, and sometimes smile! People here are dead serious about recycling and composting. They’ve been doing it for eons, and it’s second nature. Everybody already remembers to go shopping with their own bags. I’d arrive in SF over these past few years, think to go clothes shopping (for groceries, I knew from the bags), and be asked if I wanted to “purchase” a nice, paper, handle bag. Since I’m one to spend money easier on big purchases than on petty things, I’d wear the layers of new clothes, tags and all, out to the car.

Here, there’s an awareness of the natural beauty of the place that transcends the modern-day buildings and man-created structures. People are all about sailing and bicycling and hiking and walking. In fact, there are tons of “walkers” everywhere. Several times, as I have barreled through intersections without stop signs or signals, I forgot to notice crosswalks, and have mistakenly rushed past actual pedestrians stepping off curbs. I mean, in LA, we literally don’t expect people to be walking. I thought it weird when friends advised me to “not leave anything” in the cab of my car -“lock it in the trunk!” – and to secure my purse when sitting in sidewalk cafés. I just realized why we focus less on such crimes in L.A.: it’s because we don’t have as much street life in The City of Angels as in St. Francis’ metropolis and environs.

We never seem to have a mediocre meal here. There’s great food down south, too, but notable that some of our best coffee, ice cream and pizza came from here first: Peet’s, Blue Bottle Coffee, Swenson’s, Double Rainbow, Extreme Pizza to name a few. There’re scores of other pizzerias like Zachary’s, Artichoke Basile’s, and Cheeseboard, creameries like Smitten and Cream, not to mention cafés and bakeries that can only be found here, and don’t even exist (yet) in LA.

One huge difference is the ever-present presence of the bay itself, and the bridges needed to ford it. There’s no majesty like it in LA, although we DO have the beach, and our magnificent sunsets. That, they don’t have here. You have to go far and wide for a beach, and the sunsets tend more to be pastel washes. It’s a bunch of ooo’s: cold, rocky or foggy.

Asking dual-citizen denizens what’s better in LA, the first response is always: Mexican food. There are Mexican restaurants here to be sure, but it’s just not the same, not as close to the border. Secondly, people cite, “the weather.” LA’s legendary 70 degree sunny clime is coveted by Bay Area peeps. My boys claim prices seem higher here; maybe it’s just not having their parents here to pay, because gas is always lower-priced. L.A. is punished for persistent reliance on driving, whereas more people utilize available public transport options up here. Los Angeles does feel more diverse. There seem to be more parts of the Bay Area where you only see lighter skin tones, compared to the multitude of crayon box shades we have all over our southern canvas.

To know and love LA, you have to know the traffic short-cut routes, the best sunset vantage points, and where to find all the free, open-air, music and dance events, and not just over summer. We love it for our areas like Culver City, from where I can survive and not emerge for a whole month, unless I hop on the 405 to the 5 to the west bay’s 280 or east bay’s 580.