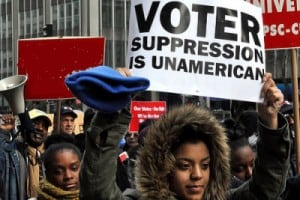 Fifty years ago today, during the peak of the Civil Rights Movement, President Lyndon B. Johnson signed the Voting Rights Act (VRA) of 1965 to put an end to discriminatory laws that denied African Americans and Latinos the right to vote. It was a historic victory after decades of fighting for equality — but fifty years later the protections in the VRA have been nullified.

In 2013, the Supreme Court gutted a central provision of the Voting Rights Act, and the impact was swift. Almost immediately, a number of states moved to implement harsh new election laws — nearly all of them primarily affecting the very people that the VRA was enacted to protect.

Bipartisan legislation was introduced earlier this year to restore the VRA — but House Republican leaders have refused to bring it to a vote. This inaction cannot stand. Today, on the 50th anniversary of the VRA, we need you to speak out. Help us reach 20,000 signatures demanding the GOP leadership restore voting rights for all.

Events in the last two years have been a harsh reminder that racism still exists in our country. From demonstrations in Ferguson and New York to rallies against the prejudiced SB 1070 in Arizona, Americans are standing up against injustice across the nation. But success depends on an electoral system where everyone’s voice can be heard.

Proponents of restrictive voting laws argue that they are designed to prevent voter fraud — not to disenfranchise minority communities. But study after study has shown that voter fraud is virtually non-existent. In the meantime, thousands of Americans have been denied the right to vote through these harmful laws.

If we don’t restore the Voting Rights Act now, the upcoming presidential election will be the first in more than fifty years without protections against racial discrimination — and we cannot succeed in our fight to save this planet without an open and fair election system.

Will we set the clock back fifty years? Will we allow the systemic disenfranchisement and suppression of minority voices?

Today, on the 50th anniversary of the VRA, join thousands across the country in speaking out for fair laws, just elections, and equal rights for all. When you add your name, we’ll send your message to GOP leaders John Boehner, Kevin McCarthy, and Bob Goodlatte, as well as your representative, so they know you won’t stand alongside this injustice.

Today, on the 50th anniversary of the Voting Rights Act, sign the petition to restore it »