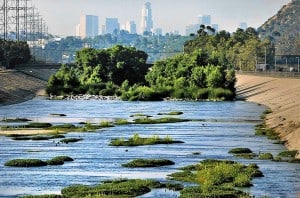 The ongoing efforts to revitalize the L.A. River reached another milestone yesterday, as the $1.3 billion river habitat restoration plan outlined by the city was unanimously approved this morning by the Civil Works Review Board of the U.S. Army Corps of Engineers in Washington D.C.

“Today is the culmination of more than a decade of work and marks an important milestone in our efforts to restore the Los Angeles River,” said Mayor Eric Garcetti in a press release. “Because the Army Corps of Engineers has now given its official blessing, we have an opportunity to transform both the river’s aquatic riparian ecosystem and our city.”

A year ago, the plan, known as Alternative 20 of the Los Angeles River Ecosystem Feasibility Study, had been recommended for approval by the U.S. Army Corps of Engineers after intense lobbying by Mayor Garcetti, including a conversation with President Obama at the White House. “I think we’re on track for the L.A. River,” the president told the mayor at the time, according to the Los Angeles Times.

The $9.71-million Feasibility Study was initiated in 2006 at the behest of the U.S. Congress. The study initially looked into the 32-mile stretch of the river between San Fernando Valley and the City of Vernon, but its scope is now focused on the 11-mile portion that connects Griffith Park to downtown Los Angeles. Soft-bottomed in some sections, it is the area the Army Corps has determined to have the greatest potential for eco-system restoration.

Alternative 20 is the most comprehensive of all options outlined in the study. It will restore approximately 719 acres of habitat, including adding a side channel behind Ferraro Fields, widening of over 300 feet in Taylor Yard, and tributary restoration on the east side of the Arroyo Seco watershed, extensive work on the Piggyback Yard, restoration of the Verdugo Wash, and the wetlands of the Los Angeles State Historic Park. It is projected to cost $1.3 billion, after a cost increase from the original $1.03 billion.

The project will now be sent to the Army Corps’ chief of engineer for approval by November. If approved, it will then be sent to Congress for authorization and appropriation of funds, after which the city and the Army Corps can begin construction.