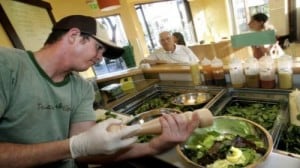 Founded in Culver City in 2006 by Erik Oberholtzer, Matt Lyman and David Dressler, Tender Greens now has 22 locations throughout California, including two in downtown San Francisco and one in Walnut Creek. But especially with this new deal, expect further expansion.

Per The Times, Tender Greens is the first company that Meyer and Union Square Hospitality Group have bought into rather than developed themselves. The deal will help the chain pay back investors and expand to locations outside of California.

“They are restaurateurs who understand our culture, know what it’s like to run a restaurant, and we share a point of view on hospitality,” Tender Greens’ director of PR Christina Wong told Scoop via spokesperson Megan Boles.

Financial terms of the agreement were not disclosed, but according to a press release, as part of the investment, Meyer will join Tender Greens’ Board of Directors.