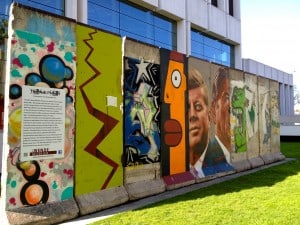 The Cold War erupted 70 years ago into a breathless battle of brinksmanship between two nuclear superpowers. It pitted America the Good against the Soviet Bloc’s Evil Empire; a period when jazz was subversive and outlawed, the Olympic Games deadly serious and world annihilation possible at the push of a red button.

Culver City’s Wende Museum and Archive of the Cold War documents this era behind a plain facade in the last bay of a cul de sac on Buckingham Parkway. Only a 12-foot concrete slab painted in bright interlocking figures distinguishes it, a plaque on a nearby wall identifying it as an actual remnant of the once epicenter of Assured Mutual Mass Destruction: the Berlin Wall. It looks a little scarier from the back, but has lost its sting in the fog of time. The museum exists to preserve the sting for posterity.

The Wende is where some 100,000 artifacts from the Soviet era have found a new home. Countless others were dumped, trashed, burned, buried, destroyed and abandoned when the wall fell, Berlin reunified and the USSR imploded. A singular, three-year turning point in world history. Wende means turning–or flash–point. The museum exists because founder Justinian Jambol believes preserving the archives of scientific, inventive, creative, manufacturing and ordinary lives behind the Iron Curtain is crucial to understanding the era and drawing lessons from the similarities of human life as well as the unbreachable political divisions.

Behind the museum’s heavy door on the second floor, spotlights in the current exhibit Face to Face focus on paintings and photographs of Eastern bloc citizens going about their lives, from punk rockers and laughing babushkas to aging grammas hugging their husbands and lying in a hospital bed.

The intent is to reveal the lives of Soviet citizens living under authoritarian rule as well as documenting that rule. Jambol created the Wende in 2002 with a treasure trove of artifacts abandoned by a people wishing to wash away the past. The Berlin Wall was pulled down by citizens of both East and West Germany in 1989, who were then reunified as Germans in 1990. Forgetting was the order of the day. Jambol believes there is much value in remembering.

Chief Curator Joes Segal culled thousands of paintings and photographs to highlight the humanity of people on both sides of the wall. Behind the real dangers of those four and a half decades, people laughed and had families, invented and created, danced and sang.

“There were paintings left lying on roadsides,” Segal said recently while pulling out wall-size paintings of the era from slotted racks. “People didn’t want to remember that time or be reminded of it. Artifacts were tossed away or abandoned when they walked away from their jobs or lives.” For decades, there was nowhere for them to go. Now the Wende receives boxes of artifacts almost daily, stored in three locations in California and several more overseas.

The museum offers two public tours on Fridays, where curator John Ahouse shares tales of the relics. The upstairs exhibit rooms display portraits of Eastern Bloc citizens who could be from anywhere, even next door. The on-site archival vault filled with busts, paintings, art and memorabilia is downstairs.

The tour ends with Facing the Wall, a semi-permanent exhibit that ends in 2016. Here four points of view–from an East German border guard and a Stasi secret police officer and a West German day visitor and a wall painter–collide to create the atmosphere each faced. It is stuffed with spyware, wanted posters of enemies of the state and their lookalikes, Verboten warning signs from the Wall itself and a wall poster of infamous Checkpoint Charlie with a continuously looping film showing East German guards facing the West. That they are dressed in neat uniforms with a single revolver belted at their side will not alarm anyone born in this century, but to fans of James Bond and John le Carre, they are a grim reminder of this flashpoint in the deadly struggle between East and West.

It is that conflict which the Wende seeks to humanize. Beyond the geo-politics, the clash of cultures and the nightmare arsenals, the artifacts show ordinary life hidden behind an Iron Curtain for 46 years.

Jambol’s 900-page book Beyond the Wall is on the sign-in table upstairs. Its 2,500 images document the Soviet Era from a collection of bright and inventive furniture decades before Ikea, disfigured busts of former icon Lenin and relics of ordinary people doing ordinary things in an extraordinary time.

The Wende has leased the decommissioned National Guard Armory at 10808 Culver Blvd, itself a Cold War relic, from Culver City. The move next year will triple the exhibition space and allow for the eventual return of all 11 sections of the Berlin Wall to be exhibited there.