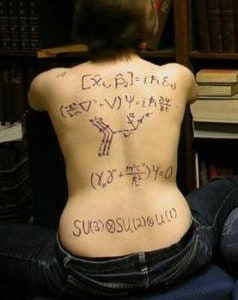 What is the “Math of Your Body?”

For so long people with weight issues have been told that weight is simply a matter of eating less and moving more. It’s a matter of calibrating the calories in and calories out for your body. If we aren’t able to eat less and move more than it must be directly related to our lack of willpower.

First, I can’t stand the word “willpower.” I think we should abolish its use from our language. It simply means, “You should be shamed” when anyone uses willpower in a sentence. For example, “Eating less is simply a matter of willpower.” They are really saying “You should be ashamed because you can’t endure eating less. You must be flawed.”

If anyone gives you that message, pity them. For they know not of what they speak.

Hormones. Weight has a lot to do with hormones and I’m going to attempt to explain what that means.

In everyone’s midbrain there is an area called the VTA-ventral tegmental area. In this area, dopamine is released when we experience something pleasurable. This area is implicated in addiction. Eat something with sugar, or salt and fat and our brain releases dopamine which  makes us calm down.

This VTA area is also where cognition, memory, behavior and that feeling of being in love, also begin. So when we eat something pleasurable, dopamine is released and begins to make it’s way up to the prefrontal cortex. This journey is called the Reward Pathway. Each time we as foodies even think about the pleasurable food, we don’t even have to actually eat it, to get a hit. If we think about it we may get a hit. Here’s why it doesn’t work just to think about it: the cells in our body don’t like too much dopamine, so they actually cut off our ability to receive too much dopamine. So in order to even get a hit, it takes more of the pleasure (food) to get one.

I don’t know anyone in Los Angeles by the way, that doesn’t conduct behaviors that induce the Reward Pathway. From technology junkies, to exercise addicts to driving aggressively, we see people stuck in their behaviors constantly, getting their own highs to get that dopamine hit.

It’s just that over-exercising seems so much more socially acceptable then over-eating.

There is also a hormone called cortisol that is associated with flight or fight. When we were cavemen, we needed cortisol to run from the tigers (flight) or to kill the beast (fight). When we experience stress, then cortisol is released to help us navigate the stress. However, we also have another hormone called ghrelin that is the hormone that tells us to eat more. When stress exists, cortisol is released and for people with weight issues, ghrelin is activated to yell at your body in periods of high strain, “eat the beast” because you have to survive the stress.

How about the exercise? If I walk say 1 hour every day, after awhile my body actually accommodates to the level of activity I am doing. My body simply maintains my weight, even though personally I get 10,000 steps per day average. I do not sit around. I move all day long. However my body has multiple set points and 10,000 steps is simply average. It will not be enough for me to lose weight. So therefore I must find a way to to reorganize my body/mind into letting go of stored fat by changing my routines and habits.

I know pretty much everyone in L.A. is fairly busy. How do we have time for more exercise? Not to mention “exercise because you are fat” is a lousy motivational strategy long term. So finding a way to move more that burns the calories in a way I can enjoy takes copious amounts of time to figure out. Do you have that time?

Also, if I am eating a certain healthy way, eventually my body accommodates and no longer efficiently burns the fuel. Even if it’s only protein and vegetables. If it is the same foods, my body doesn’t have to do any extra work. If I attempt to eat even less, I can only endure hunger for so long. Hunger is our life force. It is a largely misunderstood human right. We associate hunger with being fat. And then we’re told to turn off our life force. Don’t listen to our life force. It has betrayed us, it has given us mixed signals. But it is a precious quality of being human. It is not a fault of your humanness.

So I have to change my eating routine that still provides nourishing food, and keeps me satisfied. No grabbing a protein bar in-between errands. I have to pack something to carry with me daily.

Anyone understand yet how bloody complicated this problem is?

And I am a very busy person, so this “part-time” job I have (at least 20 hours a week spent on planning, cooking, shopping, and exercising) of trying to lose weight and having to think, re-think, plan and execute is not about me having willpower.

We haven’t yet touched on sleep. Lack of sleep deeply impacts all these hormones having to do with weight. There is solid documentation now about how less than 7 to 8 hours sleep a night will impact weight. And that has to be 7 to 8 hours solid sleep. I do not get this amount, do you? I wake up multiple times to pee, have a pain, turn over, pull off the covers, pull on the covers, etc. Solid sleep comes in welcome increments but it isn’t 7 to 8 hours.

So once again, time and effort have to be put into place to think about what disturbs your sleep, who and what can support you in getting more rest.

So “eating less and moving more” is a simplified ( and flawed) answer to a very difficult problem. Anyone who tells you otherwise, really doesn’t know the facts. So don’t feel put down or that there is something inherently flawed with you. Accept yourself. Give yourself loads of compassion everyday and know that everyone, everyone struggles with something. Just don’t give up and don’t stop living as your best self. As far as I can see, having a Reward Pathway regarding food isn’t the worse addiction. We are usually lovely, giving people who perhaps have big asses. That’s it. Really.

Strive to live your best lives. The math of your body, how much you can take in and how much you need to put out varies dramatically from person to person. Diets will tell you there is a formula but you must understand the true formula will vary in each of us in order to lose and maintain the weight loss. And it changes. What worked 10 years ago, no longer works. And that is painful and frustrating.

Love yourself now. Because for me personally, this challenge I face isn’t going away and I haven’t found any easy answer. I’m still overweight. But somehow it isn’t an option to give up. I must love myself in all the hard parts. And this is a very hard part.