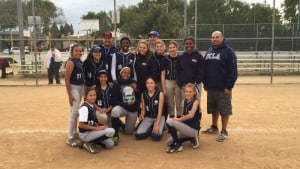 On May 7, the Culver City Middle School Girls’ Softball Team’s season came to an end with a win in the Championship Game!

Mejia, the daughter of second-year coach Jose Mejia, baffled Harvard Westlake, striking out 11 batters. She allowed one earned run on three hits and two walks over seven innings. She also pitched a no hitter against Chaminade Middle School in the semi-final game, in order to reach the Championship Game.

With the game 3-1 in the bottom of the 4th inning, the offensive charge was lead by Gabby Guerrero, Michelle Franco, Brook Francis and Junie Dickson. They helped lead the Culver City Middle School Panthers with nine hits and five RBIs over the last 3 innings.

The Panthers had a balanced offense and defense all season long. The Panther offense never scored fewer than 10 runs and scored over 20 runs four different times. The offense was powered by Brook Francis, Gabby Guerrero, and Marisa Mejia. All of these players batted over .500 and had 3 homeruns during the season.

On defense, the Panthers only gave up 6 runs the entire season, including in the playoffs. Along with Marisa, Gabby Guerrero and Lailah Bell anchored the pitching staff for the Panthers, led by assistant coaches Todd Francis, Vincent Guerrero.

The season was very demanding for all the players on the championship team. Along with softball obligations for the middle school, most are also part of travel, ASA or Little League teams. With all the extracurricular activities and schoolwork for these players, winning the championship was a goal they reached by putting in a lot of hard work and dedication to a sport they love.

To watch a video of the championship game, please click www.youtube.com/watch?v=sPQx6sJV1O4&feature=youtu.be