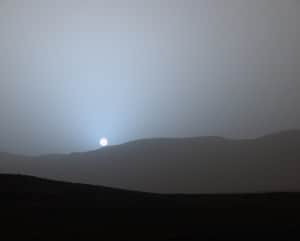 NASA laboratory experiments suggest the dark material coating some geological features of Jupiter’s moon Europa is likely sea salt from a subsurface ocean, discolored by exposure to radiation. The presence of sea salt on Europa’s surface suggests the ocean is interacting with its rocky seafloor—an important consideration in determining whether the icy moon could support life.

“We have many questions about Europa, the most important and most difficult to answer being is there life? Research like this is important because it focuses on questions we can definitively answer, like whether or not Europa is inhabitable,” said Curt Niebur, Outer Planets Program scientist at NASA Headquarters in Washington. “Once we have those answers, we can tackle the bigger question about life in the ocean beneath Europa’s ice shell.”

“If it’s just salt from the ocean below, that would be a simple and elegant solution for what the dark, mysterious material is,” said research lead Kevin Hand, a planetary scientist at NASA’s Jet Propulsion Laboratory in Pasadena, California.

One certainty is that Europa is bathed in radiation created by Jupiter’s powerful magnetic field. Electrons and ions slam into the moon’s surface with the intensity of a particle accelerator.

To identify the dark material, Hand and his co-author Robert Carlson, also at JPL, created a simulated patch of Europa’s surface in a laboratory test apparatus for testing possible candidate substances. For each material, they collected spectra — which are like chemical fingerprints — encoded in the light reflected by the compounds.

“We call it our ‘Europa in a can,’” Hand said. “The lab setup mimics conditions on Europa’s surface in terms of temperature, pressure and radiation exposure. The spectra of these materials can then be compared to those collected by spacecraft and telescopes.”

For this particular research, the scientists tested samples of common salt—sodium chloride—along with mixtures of salt and water, in their vacuum chamber at Europa’s chilly surface temperature of minus 280 degrees Fahrenheit. They then bombarded the salty samples with an electron beam to simulate the intense radiation on the moon’s surface.

After a few tens of hours of exposure to this harsh environment, which corresponds to as long as a century on Europa, the salt samples, which were initially white just like table salt, turned a yellowish-brown color similar to features on the icy moon. The researchers found the color of these samples, as measured in their spectra, showed a strong resemblance to the color within fractures on Europa that were imaged by NASA’s Galileo mission. 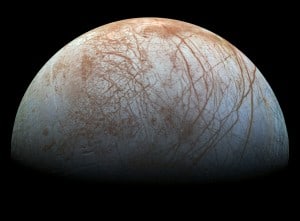 THE SUN DIPS TO A MARTIAN HORIZON in a blue-tinged sky in images sent home to Earth this week from NASA’s Curiosity Mars rover. Curiosity used its Mast Camera (Mastcam) to record the sunset during an evening of skywatching on April 15, 2015.

“The colors come from the fact that the very fine dust is the right size so that blue light penetrates the atmosphere slightly more efficiently,” said Mark Lemmon of Texas A&M University, College Station, the Curiosity science-team member who planned the observations. “When the blue light scatters off the dust, it stays closer to the direction of the sun than light of other colors does. The rest of the sky is yellow to orange, as yellow and red light scatter all over the sky instead of being absorbed or staying close to the sun.”