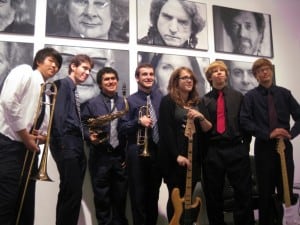 AVPA will present two spring music concerts this spring, giving all the ensembles a chance to perform a variety of music that has been rehearsed throughout the spring semester.

Friday, May 22 – AVPA Showcase – features our smaller ensembles. The Jazz Combo, Sax Ensemble, and some of our chamber music ensembles will be on the program. The Jazz Combo has been making the rounds throughout the community, performing at several events this year. In addition to their annual entertaining gigs for the Culver City Education Foundation at “Sip for Our Schools” in October and “Tribute to the Stars” at Sony Pictures in May, the Jazz Combo also were a hit at the Culver City Mayor’s Luncheon and the PTSA Honorary Service Awards. The Jazz Combo and Sax Ensemble have been under the instruction of Dr. David Brennan, AVPA faculty member.

Friday, May 29 – Large Ensemble Concert – this evening’s concert will feature the Concert Band, Jazz Ensemble, String Ensemble, Chamber Singers, and some of our chamber music ensembles. The Concert Band and Jazz Ensemble recently performed at the Music in the Parks Festival. Both ensembles won 1st Place in their categories, as well as receiving ratings of “Excellent.” The Concert Band also performed at the Southern California School Band and Orchestra Association Festival in March, receiving a rating of “Excellent” for their performance, and “Superior” for their sight-reading.

The Chamber Singers performed at Walt Disney Concert Hall on May 1 as part of the Los Angeles Master Chorale’s High School Choir Festival. Over 900 choral students from throughout the region performed several works in the hallowed hall. Three members of the Chamber Singers, Isabel Parra, Alberto Cruz, and Niko Vlahakis were also selected to perform as part of the festival’s Honor Choir.

Various chamber music ensembles have been rehearsing throughout the spring and will perform different repertoire over both concerts. They are under the direction of String Ensemble director Dr. Tania Fleischer. The Chamber Singers are directed by Danielle Koplinka-Loehr and Dr. Tony Spano. Dr. Spano also directs the Concert Band and Jazz Ensemble.

The Centaur Marching Band, which is also the Concert Band after football season, has been granted the opportunity to order new band uniforms for the fall of 2015. The entire music program’s students, parents, and faculty would like to thank the CCUSD Board of Education and administration for their extraordinary support!

Both concerts begin at 7pm in the Robert Frost Auditorium
Admission is free – donations are always accepted!