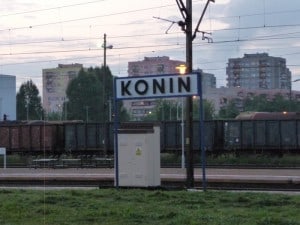 My recent trip to Eastern Europe also included my second foray into Poland. For a portion of the trip, I separated from my air-travel-preferring friend, and took the train from Berlin to Warsaw to Krakow by myself. I went out of the way to go back to Poland, still fascinated by the land on which my ancestors sowed the seeds of our family tree from at least as far back as the mid-19th century. Both times I’ve been, I’ve felt a familiarity, yet an overwhelming sense of otherness.

Even here, we are not “Polish-American,” rather, we’re “Jewish-American.” Yet, the question, “Wait, isn’t ‘Jewish’ a religion?” is complicated, as are my feelings about demographic surveys. I don’t identify as “white,” and have been loving the new “decline to state” option. In any case, my trips to Poland are part of my effort to understand these feelings.

I’d always wanted to know what Poland looked like; you think of it in black and white, like WWII news clips. The countryside still has “shtetls,” (Yiddish for little towns) just not Jewish ones. It’s a land of forests, rivers and fields. Where I’ve traversed is flat, although there are some skiing destinations in the south like famous Zakopane. The landscape is strewn with church spires and clock towers. This train trip traversed a large swath of area that my forebears referred to as “Russian Poland” in their Atlantic-crossing documents.

The five-hour odyssey from Berlin to Warsaw flew by, as I consulted my “Jewish Heritage in Poland” map, acquired during my last trip here in 2011. It is fascinating to bridge the distances between stations knowing where the Jewish communities had been. There is virtually no part of Poland that did not contain a Jewish community, unlike a similar map I saw at the Jewish museum in Berlin. There, I found the Swabian town of a German friend. There was the conspicuous lack of a “square” marking the presence of a historical Jewish community; there never had been one.

On my map, a white menorah means the remains of a synagogue, a slab means the existence of a Jewish cemetery, a blue menorah means a synagogue open to visitors. A Star of David inside a square means the remains of a ghetto, and the dreaded black square denotes either a Nazi concentration camp, like Auschwitz, or a Nazi death camp, like Chmelno, which the train passed at a distance on this trip.

Many of the towns between Berlin and Warsaw were recognizable names, but the one I was most interested in was Konin, my material great-grandmother’s town, and originally part of the reason for the train trip. Believe it or not, however, I was feeling a little rushed, and decided not to get off the train. Next trip, I’ll rent a car. Soon, the announcement for “Warshawa” was made over the speaker, heralding more “civilization” out the windows, and tons more Jewish markings on my trusty map.

Poland, to Ashkenazi Jews, is a major source of what makes up our diaspora Jewish culture. Jews in Poland were considered one of several tolerated “nationalities” for a thousand years. I questioned that thousand, until I finally made it to the new POLIN Museum (of Polish-Jewish history) in Warsaw, the main reason for my side-trip. I saw it under construction in 2011, rising out of what was virtually the center of the flattened Warsaw. While at the museum, I finally figured out my fourth “town” – my maternal grandfather’s branch of the family!

We had known he was a member of the so-called “Mokover” landsmanshaft (hometown society). This should have meant his parents had come from a town called “Makow, ” but no such town is listed on any current maps, nor even on any maps depicting towns and shtetls just before WWII. If one asks modern Poles, they’ll tell you there are many towns called “Makow” all over Poland.

We know from a relative that family elders spoke of their town being “near Warsaw,” which could mean anything, given that they travelled by droshky, like Tevye in “Fiddler on the Roof.” At the museum, however, a map of Jewish settlements in 1765 revealed that, less than a hundred years before my ancestors emigrated, there was a town just north of Warsaw called, simply, Makow. That town is now referred to as “Makow Mazowiecki,” “mazowiecki” meaning a kind of region. This has got to be where our Morrises – name was changed from who knows what -were from. One would think it was difficult to research Jewish genealogy because of the Holocaust, but the problem is more because Jewish records might be in either Yiddish names, Polish-ized names, or both.

As I perused the map from 1765, I was able to see all four towns associated with my family from the turn of that century: Jaroslaw, Czestochowa, Konin and Makow. The last three were considered Poland through most of history, but Jaroslaw was Austro-Hungary for a time. The thing is this: Jews in their towns were just always Jews in their towns, only tolerated, but never accepted, and not assimilated. Whoever ultimately ruled over the land, from the earlier days of landed gentry to the governments of recent times, for Jews it was always just a matter of more or less tolerance.

I am reminded of the Japanese phrase, “sumeba miyako.” Even with their opposite experience from Jews, they came up with a phrase that means, “if you live in a place long enough, it eventually will feel like home.” That’s what the thousand-year Poland experience may have felt like to Jews, as the two-hundred year experience in the United States feels to many of us now. My ongoing quest to understand the Jewish experience Poland elicits a yearning and affection for Israel, yet confirms my belief that anybody should be able to live anywhere, beyond just tolerance or acceptance, to harmonious coexistence.