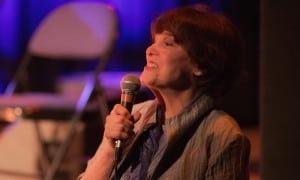 While still awaiting a planned new home in Culver City, the Jazz Bakery remains a visible force for jazz through its Moveable Feast concert series. That effort has gained further support with the news that the organization was awarded an NEA Art Works grant of $30,000 to support a series of what’s billed as “concerts, conversations and workshops” to be scheduled between Nov. 1, 2015 and Oct. 31, 2016.

The series highlights a number of Southern California jazz greats, including Hubert Laws, Poncho Sanchez, the Clayton Brothers with Ernie Andrews, Alan Pasqua and Dwight Trible. Dates and locations for the concerts are still to be announced.

In a statement, Jazz Bakery’s artistic director and founder, Ruth Price, pictured above, said: “We’re so excited that the NEA has recognized these fine Southern California artists as well as the 23-year history of the Jazz Bakery.”

First established in Culver City as a nonprofit performance space, the Jazz Bakery’s previous location closed in 2009 after the venue lost its lease in the Helms Bakery complex. The venue has finalized plans for a new home near the Kirk Douglas Theatre, and has an offer from architect Frank Gehry to contribute its design. Plans call for a two-story building, with the main, 266-seat concert room upstairs and a small black box theater on the ground floor. The Bakery received a small parcel of land from Culver City as a gift in 2012, and continues to pursue a new permanent home.

The Jazz Bakery’s Moveable Feast series has a busy roster of events ahead for spring, including a concert with pianist Aaron Goldberg’s trio paired with saxophonist Joshua Redman scheduled for Saturday and a solo set with celebrated pianist Vijay Iyer scheduled for Monday at REDCAT. Upcoming dates also include shows with Alfredo Rodriguez, Jane Bunnett, Antonio Sanchez and others.