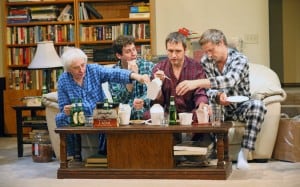 Center Theatre Group, in collaboration with the Center for the Art of Performance at UCLA, will present the West Coast premiere of Young Jean Lee’s newest work, the acclaimed play “Straight White Men,” November 20 – December 20, 2015, at CTG’s Kirk Douglas Theatre, it was announced today by CTG Artistic Director Michael Ritchie.

In his “Best Theater of 2014” list in The New York Times, Charles Isherwood wrote, “Is there anything Young Jean Lee cannot do?,” and described Lee as a “remarkably versatile and inquisitive playwright.” Isherwood has also called her “hands down, the most adventurous downtown playwright of her generation.” Over the course of the 12 years since she founded Young Jean Lee’s Theater Company, the writer-director has confronted some of America’s most pervasive cultural stereotypes with acerbic wit while continuing to experiment with theatrical forms.

In “Straight White Men,” written and directed by Lee and co-commissioned by CTG, Lee offers a traditionally structured take on the classic American father-son drama. Ed and his three adult sons come together to celebrate Christmas. They enjoy cheerful trash-talking, pranks, and takeout Chinese, and find themselves confronting a problem that even being a happy family can’t solve: when identity matters, and privilege is problematic, what is the value of being a straight white man?