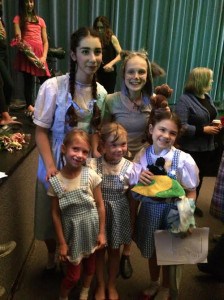 Four years and three Broadway shows ago, students at Culver City Middle School were given a choice. Their choice was: to make their own choices. When a person is gifted and/or talented in a particular area, whether it be mathematical calculations, memorization of Chinese characters, singing or dancing, the question is, “ask not what I have to teach them, ask what do I have to learn from them.” Our society is enriched when people who have special gifts or talents are given the latitude, the stage, if you will, to put them on display. Producing a theatrical performance, large or small, exercises a depth and breadth of skills, many of which are innate, as opposed to acquired, talents. Basic math, reading and writing skills are utilized in a theatrical production, but they are just means to an end. That most basic type of knowledge is extended; it’s the answer to “what’s next for next for someone who already knows the material.” Open a can of choices.

There’s something addictive about theatre, and, I imagine, film production. You can’t stop watching it, you can’t stop hearing the songs in your head. This past week(end), CCMS Performances (a group of 6th to 8th grade students from Culver City Middle School), practiced for, and eventually delivered four flawless performances of The Wizard of Oz. I chose to be there for them, to run errands or manage the box office and ushers, and lent my support to the students in any way needed. Even though I don’t work at CCMS any longer, my role as emeritus “founder” of the program granted me the privilege. I found it hard to tear myself away; just when I thought I could escape to do errands, I kept getting pulled back inside. Seeing through this production was the one remnant I kept from my old job and dragged into the new job. Now, as the 8th graders, headed by producer Isa Berliner, can move on to high school with this amazing experience under their belts, I too, feel final closure. But not before one last salvo of explanation.

You know you’re not in Kansas anymore when you sell over 7000 tickets, and earn a gross box office, including concessions, of around $9000. Of course, the costs of putting on such a production are great, too. The sound, lighting, costumes, make up, and craft services (feeding the cast) make up a large percentage of the cost base of the show. And these productions received tons of volunteer time and services, such as sets and set design, production of high quality marketing materials and programs, and an orchestra that basically works for their “service learning” hours. So nobody is doing it for the money, except that the shows do continue to clear revenue, at least enough of a deposit to contract scripts for the following year’s production.

If we are to hope that such extensions of student capability can flourish in the future as well, what 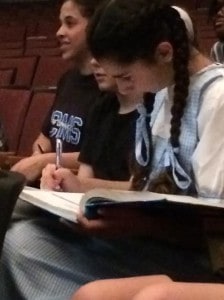 would be the basic ingredients needed? Three things, I say: brains, heart and courage.

Not all students in the show were designated as academically gifted; certainly, many on and off stage were not. There were even students from the special day program at CCMS, those who sincerely struggle with their ABC’s, and have spent most of their education outside of the mainstream track. One student’s mom raved to me, “my child’s whole face is different after coming home from practices for the play! It glowed!” But every football team needs its quarterback too, and 8th grade producer, director and choreographer Isa Berliner delivered three plays during her “stay” at CCMS while maintaining straight A’s in every one of her classes. Some teachers were very supportive of the productions through the years, extending time on homework assignments, and attending the shows, while others insisted on unyielding project due dates on the Monday after the show, not realizing just how many “Common Core standards” are addressed, and mastered, through work on a theatrical production.

Next, you have to have heart to put on such a performance. A producer/director must be able to relate to their cast and crew, and who better to do this than a peer? There’s no condescending adult “teaching” kids how to do things, rather, hit or miss, they figure stuff out themselves as they go along. Students could be seen collaborating on a variety of tasks. At one point, I heard that certain backstage crew members had been bickering. The middle school teacher who volunteered her time to supervise students in the auditorium for the week prior to the show told me she was going to stay in back with them, to make sure they would be safe and not fight. Instead, I marched back and gave the students my spiel about trusting them, and believing in them to do what they needed to do to make the show the best ever. I also told them I needed that teacher up front with me, to learn and be able to take over my role. I told them I figured I needed her more than they did.

Finally, can you imagine the courage needed – the sheer chutzpah – to presume to put on the Broadway version of The Wizard of Oz, right here in Culver City, and having entire audiences of 200 individuals knowing every word of every song, and every nuance of the lines? Unlike the lesser known Once on This Island or Seussical, people were familiar with this story, and missteps would immediately be noticed. There were actually plenty of prop errors in the first show I saw, all of which had been ironed out by the second show. A particular highlight was the Sunday matinee, when a group of Farragut “Foxes” came dressed up as Dorothy, and took pictures with the show’s stars (see photo).

Nobody knows what future incarnations of CCMS Performances will bring us, but these four years of successful student-run productions speak for themselves.