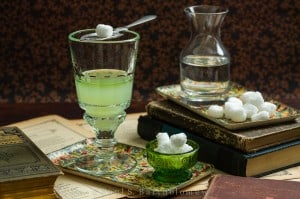 The Culver Hotel invites you to celebrate the “Green Hour” with Pernod® Absinthe on April 16th, 2015 from 6-9pm. We will sample guests on the featured “Green Hour” recipes as well as provide unique “Green Hour” giveaways. You might even see the Green Fairy while enjoying live music and perhaps magic!

Don’t know absinthe? It’s historically described as a highly alcoholic (90–148 proof) beverage. It is an anise flavored spirit derived from botanicals, including the flowers and leaves of  ‘artemisia absinthium(“grand wormwood”), together with sweet fennel, and other medicinal and culinary herbs. Absinthe traditionally has a natural green color but may also be colorless. It is commonly referred to in historical literature as “la fée verte” (the green fairy). Absinthe is traditionally bottled at a high level of proof but it is normally diluted with water prior to being consumed.

Absinthe originated in Switzerland in the late 18th century. It rose to great popularity in late 19th- and early 20th-century France particularly among Parisian artists and writers. Owing in part to its association with bohemian culture.

So join the writers, artists and radicals with some live music, and a glass of green at the Culver Hotel.