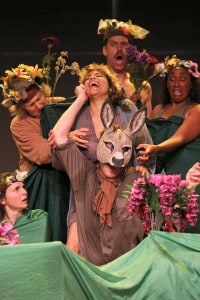 It’s BACK! Returned from tour, the internationally acclaimed, Ovation Nominated, critic and audience favorite, “A Midsummer Night’s Dream” For 2 nights only, April 13th and 14th, see this joyful production where it all began, The Actors’ Gang in Culver City.

Brush up your Shakespeare – one of the bard’s most popular comedies, it’s believed to have been written between 1590 and 1596. It portrays the events surrounding the marriage of the Duke of Athens. These include the adventures of four young Athenian lovers and a group of six amateur actors, who are controlled and manipulated by the fairies who inhabit the forest in which most of the play is set.

Catch it before it heads around the world again! For tickets go to www.ActorsGang.com