Businesses on both sides of Sepulveda Boulevard will be welcoming area residents with treats on Saturday for Culver Village’s second annual Bunny Hop. From 1 to 4 p.m., young and old residents can stroll the four blocks from Culver Boulevard to the YMCA filling Easter baskets, getting to know their neighbors and exploring the range of businesses that populate the street.

From t-shirts and passes at Six Pack Gym to wristbands and passes at the YMCA, more than 20 participating businesses will pass out candy, cookies, comic books, slurpees, crafts, food samples, posters, take Easter photos and offer a chance to win a bike.

“It’s going to be so much fun,” said Erika Seress, president of Culver Village ,(pictured below right)  the group of Sepulveda businesses formed to promote the area in 2013. Twenty-five members planned the first community event in 2013 for Halloween Trick or Treat. 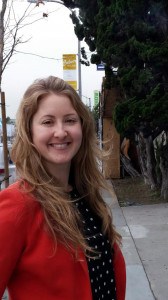 “It was a natural area to promote,” said Todd Tipton from the Culver City Economic Development Department. “The boundaries are clear and businesses willing to work to create community feeling.” Culver Village begins at Culver Boulevard and stops at the YMCA because the city’s western boundary right angles to the east on Lucerne to Culver City High School, turns south on Harter Ave., then weaves west along Ballona Creek all the way to Emporia Avenue.

“The city approached us in 2013, and I thought it was a terrific idea,” Seress said. “We had a meeting and started canvassing the businesses.” The first thing they did was hang banners on light poles to mark the boundaries of Culver Village with the help of the city. The second was a Halloween Trick or Treat.  Sammy’s Cameras printed 500 posters and then another 500,” Seress said. “We went door to door to promote it and it was a huge success. People loved it.”

The Events Planning Committee next planned a December Holiday party, Bunny Hop and Summer Rock and Walk scavenger hunt. Not all were successful.

“The [winter] holidays are just too busy,” she said. “The response was not good.” This year Culver Village plans a Summer Scavenger Hunt and Halloween Trick or Treat after the Bunny Hop.

“The best thing is we met other businesses,” said LeAnne  Schwartz, owner of LA Spice.” I got to know Touchstone massage and The Actor’s Gang. I didn’t even know they were there.” 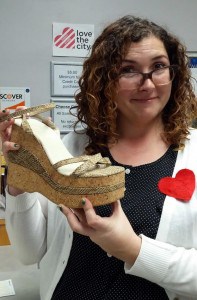 Anne Warde (left) of Love the City Thrift Store says people come in during the events and then come back to see what’s new. They become friends.

”Some businesses leap in and get involved right away, others don’t even want to talk about it,” Seress said. “We collect a $150 yearly fee from businesses and try to do everything with that, but it when it came down to improving the landscaping or hanging the banners, we couldn’t afford both.”

The making of Culver Village has been a community effort, Seress said. “It’s been a lot of work, but very rewarding.” It has inspired business to participate in the community. “We held a mixer a few weeks ago and the businesses were really behind the Bunny Hop and our plans for the year.”