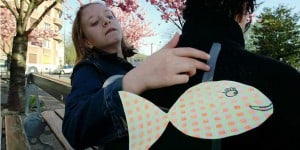 Back in the 1500’s in France when Charles was king

New Year’s was celebrated at the start of Spring

Charles decreed that the calendar, which had been the Julian

Should become Gregorian and he really wasn’t foolin’

But there were those in Europe who continued to celebrate

On the 1st of April – which was no longer the right date.

So they were teased by others and were called “April Fools”

Because they were not playing by the newly established rules

In France, the fools were called “Poissons d’Avril” for a reason

And in the signs of the winter zodiac, Pisces is the last

So in France on April 1st, if a joke’s been played on you

Here is my suggestion as to just what you should do.

Check your back to see if you’ve been given a fish to wear..!

In the 1960’s I taught in France and experienced having been taken in by an April Fool’s prank – I took the bait – I “bit” and since I had “mordu” I found a “fish” stuck on my back…! Heureusement, plus souvent on m’a donne des poissons au chocolat!

Editor’s Note – Culver City Crossroads ran this poem in 2013 on April Fool’s Day, and we thought it would be fun to read it again.