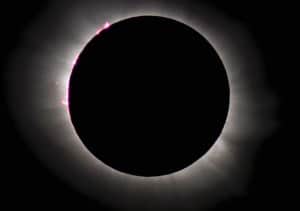 The total solar eclipse, which occurred on March 20 (by coincidence, that date was also the spring equinox), was visible along a path of totality beginning in the mid-Atlantic Ocean and continuing north to Greenland, past Iceland, and finishing in northern Sibria.

The Norwegian island of Svalbard—at the top of the world at 78° north latitude—was also in the path of totality, and Williams College astronomer Jay Pasachoff chose this desolate spot as his base of operations. His team of eight intrepid scientists from the United States, Greece, and Slovakia traveled to the Norwegian archipelago to study the Sun’s outer atmosphere and the effect of the eclipse on Earth’s weather. Pasachoff reports, “The weather was improbably-impossibly-wonderful, with a complete clear sky, much better than cloud statistics from weather satellites had led us to expect.” Their work was sponsored by a grant from the Committee for Research and Exploration of the National Geographic Society.

Pasachoff, Chair and Field Memorial Professor of Astronomy at Williams College, Williamstown, Mass., reports that “even though we are past the peak of the latest sunspot cycle, the corona still had the symmetrical shape of sunspot maximum. Also, even a preliminary view of our spectral studies showed that the corona was still especially hot, averaging well over 2,000,000°F.”

The research team, and an accompanying tourist group of 40 people, observed from an open field about 1 mile east of the city of Longyearbyen, the 2,000-person capital. The temperature of +8°F at the onset of the eclipse dropped to -7°F at mid-totality. Pasachoff is working with atmospheric physicist Marcos Peñaloza-Murillo of Venezuela in interpreting the effects of how the abrupt shut-off of solar radiation cools and shocks Earth’s atmosphere. Williams College student Allison L. Carter (class of 2016) not only took images of the partial phases and the corona with a Nikon digital camera mounted on a Tele Vue telescope but also set up measuring devices to record temperature and pressure every 30 seconds.

Other scientists in the expedition included Ronald Dantowitz of the Clay Center Observatory in Brookline, Massachusetts; Vojtech Rusin of the Tatranska Lomnica Solar Observatory in Slovakia; and Aristeidis Voulgaris and John Seiradakis of the Aristotle University in Thessaloniki, Greece. Amateur astronomer Michael Kentrianakis of New York City and eclipse map-maker Michael Zeiler were also part of the team. 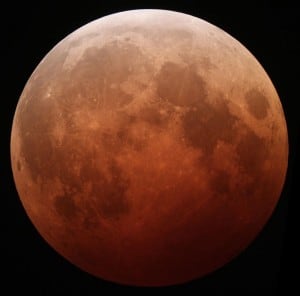 have their own chance to see an event not quite as rare as the Svalbard solar eclipse, but well worth watching—a total eclipse of the Moon, when the Moon’s orbit carries it directly into Earth’s shadow.

Unfortunately, most of us will be sleeping, at least in the early part of the eclipse. The full Moon’s left edge will begin to darken at 3:15 a.m.as it enters the umbra, or full shadow; and maximum totality occurs at 5:00 a.m. At 6:44 a.m., the setting full Moon will have just emerged from the umbra. Happy viewing!
Top Photo Credit: Jay M. Pasachoff and Allison L. Carter, Williams College