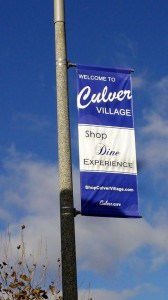 Culver City was barely one square mile when it became the redundantly quaint City of Culver City in 1917. Nearly 100 years later, it is five times that size and as far from square as is possible. After some 40 strange expansions, gerrymandering and predatory annexations, the city is five times as big, but squeezes those acres into acute angles and seemingly random twists and turns, as you can see on the Culver City Crossroads logo. Within the crazy quilt of jutting panhandles, crooked and broken borders, triangle lots and an outline like abstract art or space cartoons, it is a challenge to create a feeling of community.
Todd Tipton from the City of Culver City’s Economic Development Department agrees. “There are a lot of triangles and panhandles,” he said. The Western panhandle, where Costco sits like a basketball at the end of the long, skinny, crooked arm along Washington Blvd, was a pure land grab when the city annexed a profitable dog racing park, Tipton said.
The triangles are caused by haphazard building projects creating streets that don’t line up and intersections at less than right angles. As anyone who drives in Culver City knows, streets can change their names mid-intersection only to regain them several blocks later. Culver’s collection of flatiron buildings is a result of this, creating the triangular lots.
While borders stretch from the 10 to the 90 freeways, and the 405 to Venice Blvd., few areas are wider than six blocks. What does a city department dedicated to promoting business do with such disparity?
“We started with the Downtown area, back in the 1990s,” Tipton said. “We got the businesses together and said we would support their efforts to unify and organize into a business district. It’s been very successful.” Culver’s downtown has been lauded in both The New York Times and The Los Angeles Times newspapers as a stroller-friendly gastronomic smorgasbord.
In creating these small and somewhat seperate entities, the city doesn’t provide financing other than EDC officers’ time. They attend meetings and offer advice and counsel. Once the Downtown District was organized and hosting special events to draw visitors and customers to the area, the EDC cast their eyes around for another identifiable district.
“The Arts District in the eastern part of the city was second,” he said. “Businesses created the name and brand, then organized special events to draw people to see the art offered in the area.”
With two successes under its belt, the EDC’s roving eye moved in 2013 to a natural community stretching along business-lined Sepulveda Blvd. from Culver Blvd. to the YMCA, near to where Marina del Rey takes a bite out of the city’s western boundary. There they partnered with local businesses, who created Culver Village.
The latest community is West Culver on Washington Blvd. along the whimsically erratic western panhandle that almost, but not quite, reaches the Pacific. Businesses from Inglewood to Beethoven also welcomed the city’s proposal and formed Washington West as the fourth district in 2014.
“These groups create a public-private partnership,” Tipton said. “We give staff time to share our experience, they decide their local goals and the city benefits by fostering business growth.”
When asked where next, Tipton chuckled. “We’re looking at Fox Hills, but there are a lot of distinct areas in Culver City. With boundaries like ours, there are pockets that can create a unique brand for themselves.”
So 98 years after Harry Culver created it, his city is capitalizing on its haphazard growth by creating distinct districts and branding each one as unique. He would be pleased to see it’s working.