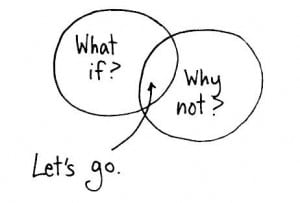 A childhood friend reflected that he’d always considered me a leader in high school. He claimed that our group of friends looked to me for decisions, albeit as innocuous as “where we should hang out at lunch,” or “what we should do Saturday night.” He cited this in response to my incredulousness at being promoted to the position of Director at American Express over twenty years ago.

I believe that leadership is defined as supporting others to be the best they can be. Followers are supportive by definition as well, but one of the things that separates a leader from a follower is fearless, creative, innovation. It is the ability to recognize a “what if,” either your own, or someone else’s, and allow the “what if” to see the light of day. I have been fortunate, from time to time, and especially at my beloved current job, to work for people who allowed my “what ifs” to materialize. Observing both of my sons’ also seeing through some “what if” successes during these current high school/college years, I began to reflect on, and wish to share here, some of my life’s most classic “what ifs.”

Through twenty years in the travel industry, I worked for four different companies. My first two years were at Tozai Travel, an independent agency located in Tokyo, headquartered in Holland, and catering to foreigners living in Japan. Then, eight years at American Express Travel Related Services, in Tokyo and Los Angeles, followed by five years at AmericanTours International, a tour operator based in L.A. with clients worldwide. Finally, I ended up at H.I.S., the Los Angeles branch of Japan’s renowned travel agency.

Tozai Travel trained me and propelled me to American Express, where I experienced the corporate life at a Fortune 500 company during its heyday of success. I was mentored and molded into an executive; I became a Director, my pinnacle salary and benefits not yet exceeded, even twenty years later. I was fortunate to roll out many of my “what ifs” at American Express. Such a company expects innovative ideas from its employees.

One occasion was when I managed the (retail travel) Amex office in downtown Los Angeles, where we sold air tickets, package tours and travelers cheques to people booking vacation travel during their lunch hours. I said, “what if we started selling business travel as well?” It was one of the first cases of what we sometimes referred to as “Betail,” or, business travel sold at a retail location. The sales of my office skyrocketed to the top ten out of 125 peer offices in the United States, for two years in a row. By the third year, I’d been promoted to Director of Consumer Travel Japan, and found myself relocated back to Tokyo.

At AmericanTours international, our bread and butter product was multilingual bus tours to destinations around the U.S.A.. I said “what if” to the idea of finding European guides who not only spoke the requisite German, French, Dutch and/or Italian, but also Japanese. With guides like that (we managed to scare up a few of them), we could fill the buses with a few Japanese customers also, thus creating a new market while developing a new-old product.

When I moved over to H.I.S., one of the clients I nurtured while at ATI, I found them working long hours into the night booking hotel rooms for their customers manually. I said “what if” to automating the process. I started putting hotel contract information into a grand Excel spreadsheet. Eventually, the company brought in technology experts who incorporated the work I’d done into a real-time online booking system that fit with other state of the art technologies of the time. One of the many reasons I decided to switch careers in the early 2000’s was the near total transition of the travel industry to online bookings done consumer-direct.

The years from 1999 to 2004 were a transitional for me; I had one foot in tourism and one in education, until I landed my current full-time gig with Culver City Unified School District. I have written often in this column about my biggest “what if” until this year: daring to question “what if… we used the same time allotted to providing intervention services for students who do not meet academic goals, to offering enrichment activities for those who do meet academic goals?” My answer was a comprehensive enrichment program, during school hours. I’ll always remain an advocate for this question academically, but my new job working for Culver City’s alternative education network of schools: Culver Park High School, Culver City Adult School and CCUSD’s iAcademy allows me to come up with many new flavors of “what ifs,” all designed to build confidence in students through positivity and gifts-based focus. One feat has been to find a way for our students not only to obtain Physical Education credit in order to graduate, but to be fit and healthy while doing so.

Upon reflection, I realize that my tendency to ask “what if” has driven my personal life as well. While a student at UCLA, I planned, according to my supervisor at the time, “the only event (a disco dance) that ever made money” for our organization. When living in Tokyo in the 1980’s, I was one of the founders of “game night” at the Jewish Community Center, where us “young foreign executives” met once a week for Trivial Pursuit matches. For many years, I gathered people by organizing what I referred to as “3D: Dinner, Dance and Discussion” nights at my house. At Contra dancing, I have been thanked for “starting a movement” of encouraging everyone to come out to “fellowship” after our dances. Never be afraid to cook up a “what if,” and taste the deliciousness of your “what if” actually happening.

Steve Jobs said it, ” Innovation distinguishes between a leader and a follower.”