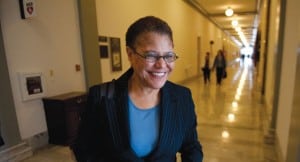 Congressional Representative Karen Bass will be hosting a moderated debate on President Obama’s request that Congress authorize the use of military force to degrade and defeat ISIL. The panel she has invited will feature four foreign policy experts who will present support of the President’s request, as well as opposition from the left and right.

If passed by Congress, the President’s proposal would allow the United States to join a coalition of more than 60 nations conducting airstrikes and impose a three-year limit on the use of force. The President is also proposing ground operations with American troops for rescue operations involving U.S. or coalition personnel, Special Operations missions against ISIL leadership and intelligence collection and assistance to partner forces.

Bass offers “I hope you can join in  March 12 at 7:00 pm at the Culver City Senior Center to voice your opinion on the President’s proposal and ask questions. The decision about committing our troops is perhaps the most important one I will make as a member of Congress and I want to hear from you.”