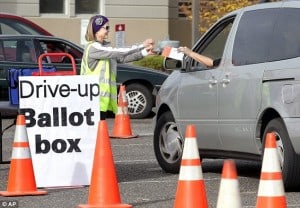 Did you know there’s drive-through voting in Culver City and Los Angeles? Should you be unable to leave your vehicle, drive to your polling station, park in the marked Curbside Voting area and call the number on the sign. A poll worker will bring the ballot to you.
Or say you marked your absentee ballot for who you wanted to fill the odd numbered seats on the Los Angeles Community College District’s Board of Trustees weeks ago and sealed it inside the return envelope.
But now you’ve changed your mind about who the best candidates are to oversee the three billion dollar budget and construction programs at the college.
No worries. Take your sealed ballot to any of the 1,500 polling stations in Culver City and the City of Los Angeles that will be open from 7 a.m. to 8 p.m. tomorrow, surrender your absentee ballot and request another. If you don’t go to your own precinct, you will be handed a pink provisional ballot, if you go to your own, you will get a regular ballot. All ballots are available in the 12 official languages. Either way, your new choices will be counted and the old ones voided.
Should you be visually or hearing impaired, disabled or need help, polling stations have special assists and voting booths, including an audio booth in the dozen official languages, magnifying glasses to help read the ballots, extra provisional ballot envelopes, even cushion balls for the pens in the vote recorders to make pressing down easier.
While you can vote at other precincts, you will find other areas have different issues on their ballots. Even if you vote for one of these, your vote won’t be counted, just your votes for the candidates in the Culver City LACCD election.
The mantra of the Los Angeles City and County election divisions is: voting never stops and everyone votes. You do not need any identification. You do not have to vote in your district. All voters can vote a provisional ballot, where their eligibility will be verified and their votes counted if they qualify.
In this, the first combined election with the City of Los Angeles, registered Culver City voters will vote for four trustees of the seven seats on the LACCD board tomorrow. Their votes will determine the four new trustees. In 2017, the three even numbered seats will be contested.
The City of Los Angeles will have a Municipal Election on May 19 among those nominated tomorrow, but Culver City voters will have already exercised their franchise.
Vote tomorrow and wear your “I VOTED” sticker proudly. It’s the only way to make your opinion count.