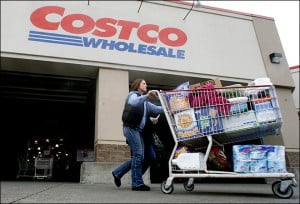 Citigroup Inc. will become the exclusive issuer of Costco’s credit cards and Visa Inc. will replace American Express as the credit-card network for Costco’s stores starting in 2016, the retailer announced Monday.

AmEx has been the only credit card accepted at Costco for the last 15 years. The deal had been a boon for both companies, analysts said, but they ended their partnership last month. The Costco partnership represented 8%, or $80 billion, of AmEx’s billed business and about 20%, or about $14 billion, of its interest-bearing credit portfolio, Richard Shane of JP Morgan Chase & Co told The Times last month.

Under the new agreement, transactions will be processed by Visa, and Citi will become the exclusive issuer of co-branded credit cards on April 1, 2016.

The membership-only business otherwise accepts only cash or debit cards.

The deal is subject to the purchase of Costco’s existing co-branded credit card portfolio by Citi, Costco said in a statement.

The retailer expects the existing portfolio to be sold, spokesman Bob Nelson said. When that happens, existing Costco members will have their new cards sent to them.

“The details of that will come out down the road,” he said.

The new cards will provide rewards to Costco members, serve as membership cards and would be accepted at merchants worldwide that accept Visa credit cards.

Costco will accept other Visa cards under the new agreement.

The current AmEx-Costco deal provides members with 3% cash back at gas stations, 2% cash back at U.S. restaurants and some travel purchases, and 1% cash back on other purchases including Costco purchases.