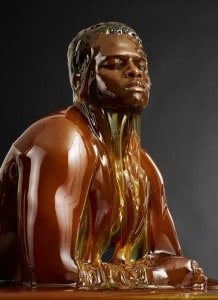 Nude models are encased in a viscous gold-hued goo in the eerie and visually striking portrait series Preservation by photographer Blake Little. Little achieved the effect by dousing his models in gallons of honey.

In the resulting images, the models resembled creatures preserved in amber, hence the project title. Little has created a photo book for the series. The series is also the subject of a solo show at Kopeikin Gallery in Culver City, March 7 to April 18, 2015.

American artist blake little‘s career as a celebrity portrait photographer has seen him frame some of the most famous faces in the world. most recently, little has experimented with the human body and mediums that can be used in tandem with skin. this investigation has lead him to ‘preservation‘, his recently-completely project and monograph, which adds a ‘sweet’ sculptural quality to his portfolio.

According to Designboom. Little covered portrait subjects in tubs of sticky-sweet honey while 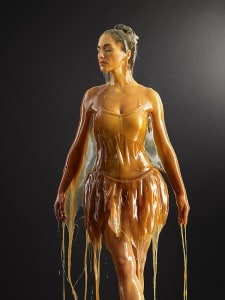 being photographed in the studio. models representing a diverse range of ages, ethnicities and body types have been completely canvassed in cascading sheets of golden goo, resulting in their almost amber-preserved appearance. seemingly frozen in place, the subjects evoke sensuality and drama, their positions and limbs exaggerated by the molten material hanging from them.

Little presents ‘preservation’ at kopeikin gallery, from March 7 to April 18, 2015. take a look at the accompanying video below (contains nudity) to see how the images were created in his studio.