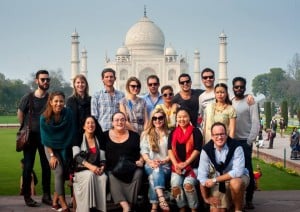 I overheard, “Now my life feels a bit more complete.” I’m not sure if my fellow traveler was being facetious or not, but, I seconded the motion; my life does feel more complete having seen the Taj Mahal. I’ve found that you get the most Facebook “likes” from special family events like graduations, college acceptances, and holiday celebrations, but one of my favorite pastimes is traveling, taking photos of my experiences, captioning them, and feverishly uploading them to Facebook the minute I’m in a wifi zone. That said, I’ve posted some pretty spectacular travel photos from around the world, but none have garnered the attention of me in front of the Taj Mahal, with over 70 “likes” and counting. We used it as the accompanying photo for my essay last week. I have been busy concerning myself with why people feel so strongly about the Taj Mahal, and I’ve come to the decision that it’s something about India itself. India’s history is utterly significant to the world’s history, and in its contributions to world culture are myriad. And to get there, from almost anywhere, you truly do have to “go out of the way” to do so.

The Taj Mahal is, of course, a beautiful piece of architecture. All at once, you are seeing an iconic symbol of India, yet a structure reminiscent of near eastern monuments and places of worship. There’s a poignant love story attached to the place that can be Googled easily enough. There is hope in knowing of the multicultural effort it took to build the place. The surrounding grounds are well kept enough, and, contrary to reports I’d heard, it IS grand, and it IS impressive.The road to get there is appropriately arduous; if it were easy to approach such an edifice, what would be the point? The city of Agra, where it is located, is far from any major city. Once in Agra, to reach the Taj Mahal, a city more emblematic of poverty than what we’d seen to that time still needs to be traversed. Our guide said it ironically was one of the poorest places in India.

I also heard on this trip that that the spiritual town of Varanasi was also a poor and run-down place. It occurs to me that tourist spots like these would in fact be where foreigners would most likely be subjected to a little hustling and hassling. Think about it, though: where better to find people running around with 10 Rupee notes to spend, ten of which could buy a taxi ride across town – the equivalent of a little over a buck. People are not usually just asking for handouts, they are actually trying to sell you a trinket or two. It can be annoying while sightseeing to be accosted by people asking you to buy this or that as you are trying to walk in the street. However, although intrusive, people are, in most cases, just trying to make a buck. I never felt fearful in India otherwise; not only are people are busily minding their own business, but they went out of the way with kindness on many occasions. I recall walking in the street where the curb was high; a gentleman put his hand out to warn us.

So, my son asked, “it’s NOT like Slumdog Millionaire there?” I wouldn’t say that either, it just depends where you go.

While on the subject of people, we moved in group formation most of the trip (except our last couple of days in Kolkata), as part of a private tour. Our travel companions were an entourage of twenty-something friends of the bride and groom. Us wedding party revelers boasted twenty different passports and residence in more countries. Our travel “team” was caring, delightful and fun. My travel buddy and I, as the conspicuous over-fifty something’s, were their mascots. It was delightful hearing not only international perspectives, but the good humor of youth. At one point we imagined how it might have been if we’d traveled with an entourage of fifty-something’s…oy vey! I can just hear the grievances, the complaining, the physical limitation issues, the grandstanders, the late-comers, the digestive needs. We had 100% none of that!

After the Taj Mahal, we continued to Jaipur, the “pink” city of Rajasthan. This was a “taste of Rajasthan” within our “taste of India.” We toured with the group but stayed separately in a so-called “haveli,” which are former grand houses repurposed into ethnic-style hotels. The word “haveli” intrigues me. English has “hovel,” a word, according to etymology.com, from the 14th century of “unknown origin.” As an undergraduate Linguistics major, and world traveler since 1973, I’ve always loved finding connections like this – I believe this is the same word, although “hovel” is a more crude thing, more like the “favelas” in Brazil. The word “favela” apparently came from the name of a tree in Brazil, but all three words are amazingly similar in sound and meaning, usually denoting a meeting of peoples rather than a coincidence. This trip brought home yet again how much we are all more similar than different. If languages are interrelated, and places are built alike, it follows that we’re all one people as well. Looking down at Jaipur from a rooftop restaurant, feeling the mountains surrounding the city basin, I had a sudden twinge of 1980’s X’ian, China.

India is utterly significant in its own right. But it reminded me in some ways of another beloved “I” country: Israel. Both “partitioned” as the colonizing Brits left in 1947, both co-existing with three major religions, both on high security alert from airports to shopping malls. Both, as writer Shashi Tharoor (who I discovered at “Oxford” bookstore in Kolkata) says of India, “a thali as opposed to a melting pot.” More about India in my third installment next week – can you imagine how much I’d write if I’d been there more than a week?