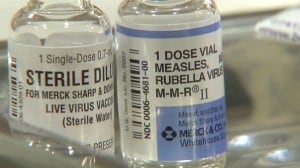 If you missed this month’s Walk With a Doc event, you don’t need to miss the talk that went with it. Vital information in regard to the California measles outbreak was offered by Dr. Jeff Penso, noted local pediatrician.

Anyone who has not been vaccinated is at risk of getting measles. Early measles symptoms include high fever, cough, runny nose, and red, watery eyes.
90 percent of people who are not immune to measles will contract the disease if exposed.
Two doses of the measles vaccine are considered 99 percent effective in protecting against the disease.
Last December, some visitors to “the happiest place on earth” left California’s Disneyland theme park with a souvenir they didn’t plan for — measles, also known as rubeola. The Centers for Disease Control and Prevention (CDC) has reported 102 cases of the airborne illness this year, and that number continues to rise. But even before the theme-park outbreak, 2014 was a record year for measles cases in the United States with 644 cases recorded in 27 states.
During a recent CDC telebriefing on the outbreak, Anne Schuchat, MD, assistant surgeon general of the United States Public Health Service, said that each year about 20 million people get measles worldwide. Dr. Schuchat recommends that children, unless immunocompromised, get vaccinated and adults check with their doctor if they’re unsure about their status.
The increase in U.S. measles cases is alarming, not only because the disease is highly contagious, but also because it can have serious complications. Here are 10 essential facts you need to know about measles:
1. Measles is highly contagious. The measles virus lives in the nose and throat mucus of an infected person, and can be spread through sneezing and coughing. The virus can remain active and contagious on a surface where the infected person sneezed or coughed for up to two hours. Transmission can begin four days before symptoms appear, and measles is so contagious that 90 percent of exposed people who are not immune will become infected, according to the CDC.
2. Early measles symptoms look like flu symptoms. Seven to 14 days after the person is infected, her symptoms will begin to develop: high fever, cough, runny nose, and red, watery eyes. Two to three days after these symptoms appear, tiny white spots called Koplik might appear inside the mouth, according to the CDC. Three to five days after the initial symptoms, the red-spotted rash characteristic of measles breaks out, and the fever spikes. The rash and fever usually subside within a few days.
3. Measles can lead to severe complications. For every 1,000 people with measles, 1 to 3 will suffer from severe complications, some of which include pneumonia and swelling of the brain (encephalitis). These complications can lead to death.
4. There is no treatment for measles. Because measles is caused by a virus, there is no specific treatment. However, taking Vitamin A might make the illness milder, says Stephen Pelton, MD, chief of Pediatric Infectious Diseases at Boston Medical Center.
5. The measles vaccine is highly effective. The current measles vaccine has led to a 99 percent reduction in measles cases compared to the pre-vaccine era. Before the vaccine was licensed in 1963, the CDC estimated 3 to 4 million measles cases occurred each year in the United States, with 500 deaths. By the 21st century, the number shrunk to 86 cases with no deaths. The measles vaccine is included in MMR, a combination vaccine that protects against measles, mumps, and rubella (German measles).
6. You probably won’t get infected if you’ve been vaccinated, and the risk is even lower if you’ve received both recommended doses. The first dose of the measles vaccine is usually given to infants aged 12 to 15 months, but it’s never too late to get vaccinated, even as an adult, says Johanna Goldfarb, MD, at the Cleveland Clinic Children’s Hospital.
The second dose can be given four weeks after the first, but is usually administered between the ages of 4 and 6 years, which is before a child typically starts kindergarten. The vaccine is considered to be 99 percent effective for people who have received both doses, compared to 95 percent for one dose.
7. Because of a thoroughly discredited report, many parents are wary of vaccinating their children. In 1998, British medical researcher Andrew Wakefield published a study in The Lancet claiming that the MMR vaccination caused children to show signs of “regressive autism.” The Lancet retracted the study in 2010, but the stigma against the MMR shot remains.
“For the children who can’t get this vaccine to be protected, everyone else has to get vaccinated,” Dr. Goldfarb says. “It’s selfish of parents not to vaccinate their children based on bogus information.”
8. The Disneyland measles outbreak is related to the anti-vaccination movement. “Individual cases are not a result of the anti-vaccine movement. However, large outbreaks are always due to having a population of undervaccinated children who are then exposed,” Dr. Pelton says.
Children, many of whom are unvaccinated immigrants, as well as people who travel to infected areas and become exposed, often bring the disease into the United States. Secondary cases occur in people who have not been vaccinated or are among the estimated 5 percent of people who don’t respond to a single dose of MMR.
9. Measles isn’t the only disease that’s spreading due to decreased vaccination rates. The vaccine for mumps is less effective than for measles and rubella. In addition to measles outbreaks, Pelton says, there have been large mumps outbreaks, including one reported this winter in NHL players. There are also pertussis (whooping cough) outbreaks nationwide due both to limited vaccine effectiveness and refusal to be vaccinated.
10. Measles could be eliminated completely. In the month of January, 14 states reported measles cases. However, health officials worldwide believe measles can be completely eradicated. All six member states of the World Health Organization (WHO) are committed to eliminating measles worldwide by the year 2020.
“This is absolutely a realistic goal,” Goldfarb says. “This is a disease that could be eliminated worldwide if people vaccinated their children.”
Links
www.everydayhealth.com/measles/
www.cdc.gov/measles/about/
www.mayoclinic.org/diseases-conditions/measles/basics/definition/con-20019675

Walk With a Doc meets on the third Saturday of every month at Veterans Park at 8:45 am. A brief talk on health issues is followed by a brisk warm-up is led by Brandon Webb of the Culver Palms YMCA, and then an hour long walk through Culver City at an easy pace.