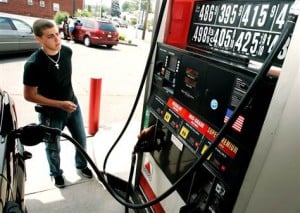 California’s tax board on Tuesday approved a 6-cent cut in the state gas tax because of lower gas prices, but it isn’t likely to affect drivers’ wallets.

The five-member State Board of Equalization voted unanimously to cut the state gasoline tax from 36 cents to 30 cents a gallon. The decrease takes effect in July, though Californians may not see a difference at the pump because of other factors affecting gas prices.

The annual adjustment is the result of a complicated deal to close the 2010 budget deficit. The agency sets the tax rate to bring in the same amount of money the old sales tax would have brought in. Because the tax board predicts lower gas prices, it is pre-emptively reducing the gas tax to avoid over collecting.

The board’s elected members, who met in Culver City, criticized lawmakers for creating a confusing system and signaled support for an overhaul.

Drivers pay an additional 18.4 cents a gallon to the federal government and a 2.25 percent sales tax that benefits local governments.

The Board of Equalization’s staff initially recommended a 7.5 cent tax cut, but the members chose a lower number because of a recent uptick in gas prices.

The tax cut will slash funding for local road and congestion relief projects in California by $868 million, according to the California Department of Transportation.

“We need stability and predictability in our transportation dollars, and my colleagues and I are deeply concerned about having to make these kind of Magic 8 Ball predictions on something so unpredictable as the price of gasoline,” said Fiona Ma, a Democratic member of the board.