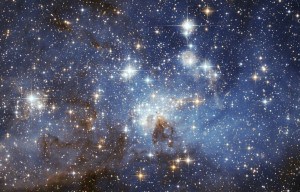 New research by UCLA physicists, published in the journal Physical Review Letters, offers a possible solution to the mystery of the origin of matter in the universe.

Alexander Kusenko, a professor of physics and astronomy in the UCLA College, and colleagues propose that the matter-antimatter asymmetry could be related to the Higgs boson particle, which was the subject of prominent news coverage when it was discovered at Switzerland’s Large Hadron Collider in 2012.

Specifically, the UCLA researchers write, the asymmetry may have been produced as a result of the motion of the Higgs field, which is associated with the Higgs boson, and which could have made the masses of particles and antiparticles in the universe temporarily unequal, allowing for a small excess of matter particles over antiparticles.

If a particle and an antiparticle meet, they disappear by emitting two photons or a pair of some other particles. In the “primordial soup” that existed after the Big Bang, there were almost equal amounts of particles of antiparticles, except for a tiny asymmetry: one particle per 10 billion. As the universe cooled, the particles and antiparticles annihilated each other in equal numbers, and only a tiny number of particles remained; this tiny amount is all the stars, planets, and gas in today’s universe, said Kusenko, who is also a senior scientist with the Kavli Institute for the Physics and Mathematics of the Universe.

The 2012 discovery of the Higgs boson particle was hailed as one of the great scientific accomplishments of recent decades. The Higgs boson was first postulated some 50 years ago as a crucial element of the modern theory of the forces of nature, and is, physicists say, what gives everything in the universe mass. Physicists at the LHC measured the particle’s mass and found its value to be peculiar; it is consistent with the possibility that the Higgs field in the first moments of the Big Bang was much larger than its “equilibrium value” observed today.

The Higgs field “had to descend to the equilibrium, in a process of ‘Higgs relaxation,’” said Kusenko, the lead author of the UCLA research. Two of Kusenko’s graduate students, Louis Yang of UCLA and Lauren Pearce of the University of Minnesota, Minneapolis, were co-authors of the study.

THE LARGE HADRON COLLIDER (LHC) is the world’s largest and most powerful particle collider, 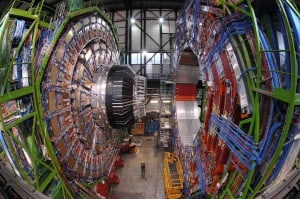 and the largest single machine in the world. It was built by the European Organization for Nuclear Research (CERN) from 1998 to 2008.

Its aim is to allow physicists to test the predictions of different theories of particle physics and high-energy physics like the Standard Model, and particularly prove or disprove the existence of the theorized Higgs boson and of the large family of new particles predicted by supersymmetric theories. The LHC contains seven detectors, each designed for certain kinds of research.

The LHC was built in collaboration with more than 10,000 scientists and engineers from over 100 countries, as well as hundreds of universities and laboratories. It lies in a tunnel 17 miles in circumference, as deep as 574 feet beneath the Franco-Swiss border near Geneva, Switzerland.