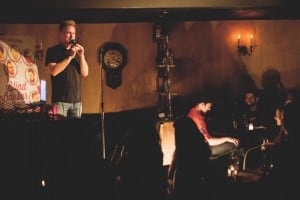 It starts with a stretch; if you don’t already know that the simple barber shop on Washington Blvd. in front of the Culver Center is a front for a ‘speakeasy’ called the Blind Barber, your stretch starts there. Yes, the front shop is a working hair salon, but it’s sort of a foyer for the real biz, the long, dark barroom behind. Most nights, it’s a cool place to get a drink and chat with the affable, young industry crowd that hangs there. The drinks are good – not expensive but quality, poured by bartenders who are more than happy to hit you anytime. But one Monday a month, the Blind Barber stretches itself all the way into a comedy club, featuring a line up of comics doing short, fast sets, working to score some loud laughs.

Dave Waite, Andy Peters, Nick Anthony, and Grant Lyon are the show’s producers, and the only recurring names in the line-up. They each show the polish that comes from lots of practice.  Beyond that, there are comics from every part of the laughing spectrum; from long-time professional stand-ups with national tours and major late night shows on their resume to newbies trying to get into the booking pool with those goals.

But the goal of every comic is the same – make ’em laugh. The advantage of working in the intimate 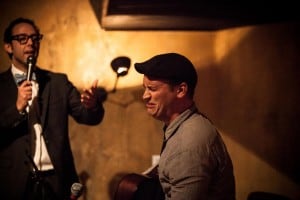 space of the Blind Barber is that there is an instant connection with the crowd. Without even a foot’s worth of space for footlights, jokes are delivered about an arm’s length away. When it works, it’s like having a great giggle with a new friend. When the act falls flat, the crickets sound like they are right there chirruping between the two of you.

Comedy needs to take risks, and playing to the closely packed tables gives performers the ideal ring to throw those kind of punches. For the audience, it’s a pretty sweet spot to hear an unexpected genius, or just spend the time mulling life’s laughable moments.

The Blind Barber is not really a speakeasy – sadly, I have never noticed any kind of fun, illegal activity taking places in my several visits there, leaving me to wonder if they really get the history of the moniker. (I mean,  whaddaya, blind? Right?) But if the notion of anyone consuming something more amusing than alcohol makes you uneasy, you are in a safe space.

As is true of any kind of speakeasy, you have to know how to get in, so you can get your name on the list at [email protected].

A Monday night comedy showcase might be a stretch, but the crowd at the Blind Barber has a lot of fun with it. Check it out, just for laughs.