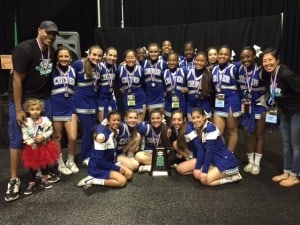 Teams from every state enter regional competitions to qualify for a chance to compete at the national level. CCHS’s varsity team qualified in December 2014 to compete in two divisions as one of 13 Southern California high schools teams to attend the national championship.

On Saturday, 12 varsity members competed in the competitive Small Varsity division. Small Varsity requires a very elite skill level. Culver City went head to head with the strongest teams in the country. For the first time in Culver City history, the squad’s Day One score qualified CCHS to advance out of prelims to semi finals. Out of 57 qualifying teams from throughout the country, CCHS they finished 27.

On Sunday, all 18 of CCHS’s varsity girls competed in the National Game Day Championships. This division requires cheerleading squads to perform three different routines in a mock game situation where they are judged on their crowd-leading ability, spirit, stunting, and tumbling skills. It is a true testament of what it really takes to be a cheerleader. CCHS’s score in semi-finals placed the squad first going into the finals. Later that evening, CCHS once again nailed its routine for a second time, but the judges placed them second, finishing just 0.2 points short of the national championship title. This was a heart-breaking loss, and while they were disappointed, the CCHS cheerleaders held their heads high and graciously accepted the honor of being ranked second in the nation.

“They came to Florida focused on representing Culver City High School with pride and giving their best to each other and the coaching staff,” said Head Coach Lindsey Farris. “The thrill of being just one of four California teams in the nation to make semi-finals in Small Varsity and winning second in the nation for Varsity Game Day (the only California team to make finals) is unbelievable. These ladies proved that they are true champions in every way. With skill, spirit, and sportsmanship they are the complete package.”

Culver City has always had a strong cheer program, however this weekend they made a true name for themselves nationally.

“It has been an honor to coach them,” said Farris. “Our achievements this season are by far the proudest moments in my coaching career.”

ESPN will rebroadcast the competition later this month, and as finalists, the network will show the CCHS performance on air.