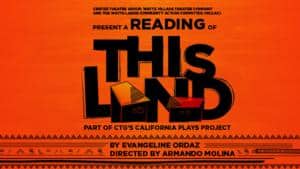 A special event that includes a reading of the new play “This Land” by Evangeline Ordaz and a tour of The Watts Labor Community Action Committee (WLCAC)’s unique, experiential Civil Rights exhibit will be presented by Center Theatre Group (under its DouglasPlus program), the Watts Village Theater Company and WLCAC on Saturday, February 28 at the WLCAC in Watts.

“This Land,” which spans over 150 years, follows four families with ancestors from different parts of the world make their home in one particular plot of Southern California land now known as Watts. A host of old curses and blessings, traditions and recipes, loves and betrayals travel down family lines from the 19th to the 21st century, forcing each successive generation to ask in times of hardship, ‘Should I stay or should I go?’

Armando Molina is the director. The cast includes Ian Alda, Richard Azurdia, Niketa Calame, Tonantzin Carmelo, Xavi Moreno, Bernadette Sullivan, Sara Tomko and LeShay Tomlinson.
The reading for “This Land” will begin at 5 p.m., with the tour preceding the reading at 4 p.m. Following the reading at 7 p.m. will be a meet-the-artists reception.

Los Angeles native Ordaz crafts a rich and complex web of diverse characters who, through triumph and despair, discover how deeply they are rooted in the dreams of their ancestors and in the land on which they stand.
The reading and the optional tour of the Civil Rights exhibit are free but reservations should be made by visiting CenterTheatreGroup.org/ThisLand or by calling (213) 628-2772.

A native of East Los Angeles, Evangeline Ordaz is a U.C. Berkeley-trained attorney who practiced public interest law before becoming a full-time playwright and screenwriter. Her play “Visitors’ Guide to Arivaca” was featured at the Denver Center for the Performing Arts’ New Play Summit. “Visitors’ Guide” also saw productions by Teatro Vision in San Jose and Company of Angels in Los Angeles. Company of Angels also produced Evangeline’s play “Bordering on Love,” which she wrote while a member of the Center Theatre Group’s Writers’ Workshop.
“This Land” was commissioned as part of CTG’s The California Plays Project. Fascinated by the landscape, people and politics of California, CTG has commissioned four Los Angeles playwrights to each write on California themes. To aid in each play’s development, CTG is partnering with several Los Angeles cultural institutions to bring these California stories to different corners of our city—and to make a wide range of Los Angeles audiences a part of the creative process. “This Land” is the second reading in the California Plays Project; the first was in 2013 with Julie Marie Myatt’s “Birder,” which included a guided bird walk in the gardens of the Natural History Museum.
CTG’s DouglasPlus provides the flexibility to explore new work and push boundaries through fully and minimally staged events, workshops and readings and traditional and non- traditional performance configurations.
The Watts Labor Community Action Committee (WLCAC) is a non-profit, community- based, human social services organization dedicated to improving the quality of life for South Central Los Angeles residents.