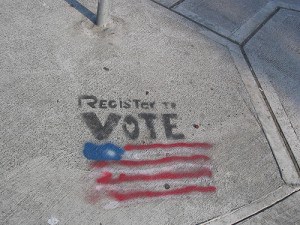 The Election Division will be hosting a district-wide voter outreach and education effort across all nine LACCD campuses in anticipation of the upcoming March 3, 2015 Primary Nominating Election. This two-day event will start on Tuesday, February 10, 2015 through Wednesday, February 11, 2015, from 10:00 a.m. to 2:00 p.m. Voter information presentations are scheduled for morning and early afternoon classes at various campuses.

For contact information for each of the colleges, visit: www.laccd.edu/About/Pages/Our-Colleges.aspx

Voter outreach and education efforts will include:

The Office of the City Clerk administers elections for the City of Los Angeles, the Los Angeles Unified School District and the Los Angeles Community College District. The City’s Municipal Elections will be held on March 3, 2015 and May 19, 2015. More information can be found on the City Clerk’s election website at: http://clerk.lacity.org/elections/ or contact the Election Division at (213) 978-0444.