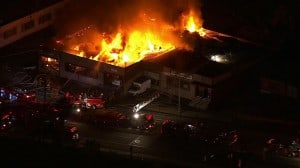 , all Culver City units were dispatched to a structure fire at 6050 Jefferson Bl. Upon arrival, units found a large fire in a large 200ft X 300ft, one story commercial building with LAFD units also arriving on scene. The property was “Inner Gardens” garden supply company and was located in the City of Los Angeles, adjacent to the LA/ Culver City border. Culver City units assisted LAFD units with fire attack and due to the large volume of fire, the strategy was rapidly changed to a defensive fire attack due to firefighter safety concerns. In all, it took over 135 firefighters 68 minutes to control the fire. The building was a total loss, and there were no injuries reported. The cause is under investigation.”