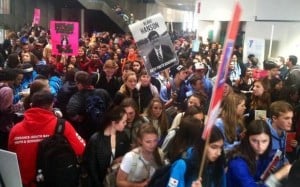 High school students from around the state poured into Fresno on Saturday to learn firsthand how California government and courts work. The California YMCA Youth & Government program, which includes the Culver Palms YMCA delegates, is training 3,100 students in the responsibilities of public service at the downtown Fresno Convention Center through Sunday.

The students chose from 26 training areas, crash courses in things like judicial review, legislative committees and how to draft bills as a senator or lobbyist.

Austin Coombs-Perez, 15, of Culver City was among those learning Saturday. “I just want to meet more people and know how other people live and just gain more knowledge about how California is, how it works, and hopefully create a bill to improve it,” Austin said as he talked with other youth in an environmental issues group.

Early Saturday afternoon, participants listened to speeches of students campaigning for youth governor, lieutenant governor and secretary of state before they broke into their training groups.

“When you listen to the speeches, how eloquent and educated these kids are, and impassioned about issues our state is facing, it really makes you think twice about saying the kids today are empty or don’t pay attention or don’t have substance. These kids do,” said Debbie Gabelich, president of California YMCA Youth & Government.

About 350 volunteer advisers are helping make the YMCA conference possible, including Alex Karaman, who teaches gender and women studies at the University of Arizona in Tucson. “The (YMCA) program did a lot for me in terms of leadership and public speaking skills and political awareness, so I just kind of wanted to give that back.”

Gabelich said the California program, in its 68th year, is one of 33 across the nation. “There are thousands of kids nationwide that really are a movement to make this a better world,” she said. “That, I think, is really exciting.”