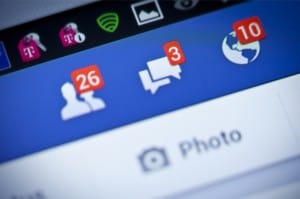 I love my Facebook life, born in 2008. Facebook let’s you keep up with old comrades, new acquaintances and family in an extremely low-maintenance manner. I’ve gotten closer to chums, through “liking” the same things, commenting together on issues, or “liking” each others’ life moments. Facebook has spurred travel; one of my first forays on the site was the rekindling of an old friendship that led me across the Pacific to Australia, and then led my Australian buddy and I around the world together, several times. On more than one occasion, pals have noted posts where I’ve heralded my arrival in their city, and they’ve rolled out the red carpet for me. Ruth’s Truths itself was founded on a Facebook post I’d dispatched during a trip to South America!

Most of my real-friend network is on Facebook too, but some (maybe 20%) are not, requiring one to stop and think for a moment, “how best do I reach this person?” The answer then is: text (most preferred), e-mail (if one must, but it seems so business-like, at the point) or, (the most outmoded method) phone. I wonder about the reasons and excuses for a person to shun our social networking Mecca.

Some folks suffer from Web phobia. The young prefer Instagram, Snapchat, and other forms of social media. Honchos like lawyers, doctors or engineer types with security clearances consider it verboten to engage. Finally, those without a web footprint at all are scary; maybe they have something to hide! Not to be confused with “reasons,” there are also “excuses” for not indulging. The one you hear most is, ” I don’t have the time,” which is a cop out. People will also say, “I get easily addicted to such things and am trying to stay clean.” Then there’s the,”I’m worried about what Big Brother is liable to do with all the information.” Once an English teacher, always an English teacher, the excuse nearest and dearest to me is, “I don’t like to read or write.” Yeah, why bother reading, writing, or looking at something when you can just pick up the telephone and demand somebody’s undivided attention!

When Facebook first came out, the kiddies immediately friended everyone in their schools, and soon grew weary of all the “noise.” These days, Facebook seems more the domain of the working generation and beyond, and we are more choosy. For us, it is a new-fangled no fuss way to exchange a business card. There’s no need to write anything down or remember any cryptic email address. And guys, if you are still into “getting a girl’s phone number,” it’s better for you to wait until after you’ve vetted each other on Facebook. Facebook messages work just fine, and you can even see a time stamp when your messages have been read, and know when the person is “live” on the site. When you’re abroad and unable to text, Facebook messaging via wi-fi is a charm, and it’s so exciting to see a private message’s juicy red numerical presence appear.

And you CAN judge a person by their profile! Facebook has mitigated the need for a postcard, a greeting card, and the letter; think squarish envelope so feverishly opened on Downton Abbey. Facebook helps you crowd source, and, you are never alone. You can make a statement, state an opinion, opt to put up a photo, and know that friends worldwide are lurking, sometimes showing that they’ve read or seen your stuff with a precious little thumb up. In summary, you become Facebook friends in order to: get to know a person better, reconnect, or be able to reach out to people in the future.

But with pleasure comes a little pain. I’ve experienced a recent spate of friending and de-friending that has given me cause to pause, and ponder the question, “to befriend or to de-friend.” Losing a Facebook friendship is more overt than in real-life, where time can lapse and redemption sought. I’ve been de-friended at least three times, and all for the same reason. I wear those de-friendings with pride; I apparently was cause of enough distraction – I mattered enough – to be removed from the list of three different male friends. They did it for one of these two reasons:

Their “significant other” demanded that I be removed. I love that I am perceived as such a threat – that my cute photos and articles and postings are considered dangerous enough to a relationship.
The men themselves, less capable of multitasking than women are, felt like they had to “concentrate” on their GF of the moment; they couldn’t afford to be distracted by my attractive self and intriguing thoughts popping up on their newsfeed.

The other main reason for a de-friend is: opposing political-religious viewpoints, and this has happened to me, too. I say, however, in both types of de-friending, that you should keep your enemies closer than even your friends! So, I even keep the dead on my friend list. The only people I’ve de-friended are those who I felt betrayed me, and they are dead to me in a sense. I’d no sooner want to see their faces in real-life than on “The Book.” You can even tone down the posts you receive in your newsfeed from a person, but de-friending is cyber-killing. Other justifications for the de-friend might be that you want your privacy shielded from a person, especially if they are stalking you, or making inane, insulting or inappropriate remarks on your page.

The only way to get back a Facebook friend is – and the metaphor is beautiful – to re-request friendship. But reasons to re-friend? Not many. If somebody has gone to the trouble of pulling up your face, and, usually without telling you, committing the act of “de-friending,” it is a rather unforgivable show of character. See you in the next life.