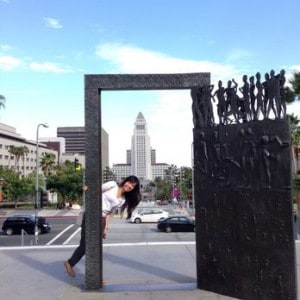 Humanitas, which has for years given budding television writers a leg up through its New Voices mentorship initiative, will now add support for locally based playwrights through PLAY LA, a new program launched in collaboration with Center Theatre Group (CTG). The announcement was made jointly by Humanitas President Ali LeRoi and CTG Artistic Director Michael Ritchie.
The annual Humanitas/CTG Playwriting Prize will be awarded to the best new unproduced play written by a Southern California-based emerging or mid-career writer. The playwright will receive a $5,000 cash prize and an additional $5,000 will be given to a local theatre to subsidize the play’s world-premiere production. Two runners-up will each be awarded a cash prize of $2,000.
The winning and runner-up plays will be developed with CTG’s literary staff, led by CTG’s Director of New Play Development Pier Carlo Talenti, and presented in professional readings in the spring of 2016 at CTG’s Kirk Douglas Theatre as part of a weekend celebration of new plays headlined by “Thanksgiving,” written by Humanitas Board of Directors Member John Sacret Young (“China Beach,” “The West Wing”).
Prize winners will be selected by a panel of noted Los Angeles theatre artists and CTG’s literary staff in conjunction with the Humanitas board of directors, trustees and executive director.
In addition, PLAY LA will develop up to five new plays written by local early- to mid- career writers interested in creating stage works from the ground up. Each playwright will receive a $1,500 stipend and access to advice from theatre, film and television professionals throughout the year.
The development of these PLAY LA plays will be overseen by award-winning playwright and screenwriter Shem Bitterman, founder of PlayLab at Los Angeles’ renowned Skylight Theatre. One play from PLAY LA will be featured as a workshop reading in the new, year-end PLAY LA weekend celebration of new plays at the Kirk Douglas Theatre.
“As the capital of the global entertainment industry, Southern California boasts what is probably the largest concentration of talented new and established writers in the world,” said LeRoi. “PLAY LA aims to recognize the many gifted playwrights among them and to support the production of their work in our hometown while also encouraging a new era of cross- pollination between the Hollywood community and the local theatre scene.”
“PLAY LA is an exciting and unprecedented collaboration between CTG, a national leader in the development and creation of new theatre works, and Humanitas, a non-profit with a 40-year history of awarding and celebrating the very best in film and television writing,” said Ritchie. “As partners we will be able to foster great new dramatic writing in all media.”
The creation of PLAY LA comes three years after the launch of Humanitas’ successful New Voices program, which pairs emerging writers with television veterans. Mentors have included Ali LeRoi, Alan Ball, Jason Katims, David Shore, Hart Hanson, Bill Lawrence, David Hudgins and Robin Swicord. So far, 20 writers have participated in the New Voices program.
“Over the past few years, Humanitas has expanded from honoring great work to helping foster great work,” observed Humanitas Executive Director Cathleen Young. “New Voices was a big step toward identifying and nurturing the next generation of television writers. I have complete confidence that PLAY LA will have a similar impact on emerging and mid-career playwrights.”