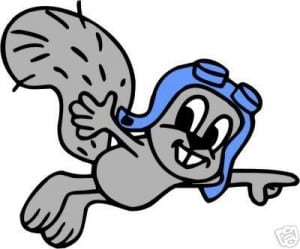 The tradition of New Year’s resolutions feels as if it’s bound together with the American ideal of self-improvement. A new calendar can be the beginning of some great new stuff, but it seems as if our culture puts it into a frame of punishment.

How to make things better?  First, get angry with yourself about everything you like but somehow feel that you shouldn’t; smoking, drinking, chocolate, potato chips, television, World of Warcraft, or whatever. While these random samples won’t be one everyone’s list (I can count on one hand the number of people I know who smoke and have plenty of fingers left over) the cultural meme is to scold yourself over your ‘failures’ and then valiantly eliminate them from your life.

As Rocky the Flying Squirrel once said, “Aww, that trick never works!”

As someone who has spent more than a decade teaching at the local YMCA, I can tell you it begins earlier every year – classes start to crowd up in early December with people longing to feel better about themselves. New Year’s resolutions don’t even wait for January any more. But the traditional standard of beating yourself up first is not what I teach, chiefly because it does not succeed.

I ask my new students the same things I ask of people who have been in the class for months or years – Do what you can do. Just breathe through it. Notice without judging. When you are finished, let it go.

Rather than jumping into big changes at the beginning of the year, setting out every day to do what can be done creates a space for accomplishment without any guilt or shame that it didn’t happen yesterday. Or that it might not happen tomorrow.

After ringing in the New Year with beloved friends, family and neighbors, I went to bed realizing I’d eaten without overeating, I’d talked without interrupting, I’d indulged without overindulging, even while spending half an hour next to a large box of chocolate covered macadamia nuts. Since holidays are when I traditionally overdo whatever I’m doing, this is kinda new. Not because I spent the night scolding myself or being super disciplined. Just noticing, just being present.

While I don’t think I want to give up my habit of making lists, I woke this morning free of any desire to make resolutions for the new year. I’m happy to do what I can do.

Interesting how the advice offered to others is often the advice we need to hear.