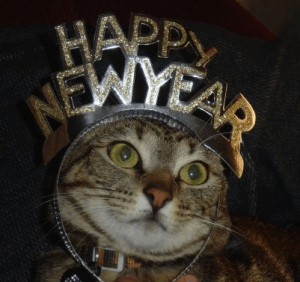 Hi friends. This week I am posting a letter from a cat who had a rough experience last year. It’s a PSA actually, a personal tale of the perils of drinking and drugs so prevalent on New Year’s Eve.

Be safe out there, folks.

It was last December, New Year’s Eve at my friend Eddy’s house in Boyle Heights. I arrived at 10 pm and the Mariachi’s were just setting up. Eddy had provided an entire bar with tequila, yogurt, Bordeaux, cat nip and angel fish poppers. Eddy said “Hey, Meatball Face, have a shot of nip.” I said “No thanks,” and was happy just to be with some decent salsa dancers. A little later I went to the litter box outside. A bunch of my friends were out there doing cuttle fish shots. They looked so happy. I finally decided to have some, just because it was New Year’s Eve and it felt like I was missing out on the celebration.

The shot tasted like tuna left out by the pool for three days. The buzz hit me almost immediately. I tried to walk back inside but my back legs wouldn’t synch up with my front legs. Then I got distracted by the paper lantern lights strung across the patio. Apparently I shredded several of them before someone yelled at me to knock it off. I finally made it to the sliding glass door but started an epic screaming session with my reflection. Eddy heard me from inside and opened the door, but when he did my reflection went away and I accused him of being a witch. I’m told it took six attempts for me to actually step over the metal rails of the sliding glass door. I kept laying my head on them and saying “Do you feel that? A train is coming!”

Once inside I realized I was super thirsty, so I went to lick the bathtub faucet like I do at home, but Eddy directed me to the bar. I reached for the clear liquid I assumed was water, but it was actually Absolut Shrimp. I did a cannon ball off the couch into the bean bag chair. It’s not my fault Eddy’s girlfriend was already there. She has one of those big swinging belly flaps that drives me wild and I started doing that paw flexing thing all over her. I kept saying “You feel that Baby? I’m making biscuits Baby. You like that?” I swear I don’t remember any of this. She was totally digging it until Eddy came into the room. THEN she got all pretend angry and screamed and slammed me to the floor. Well the floor was covered in cat nip that some guy named Nelson Feldman spilled all over the place. My arm pits were sweating cuttlefish flames by this point and the cool green cat nip felt good so I ground my face into the carpet over and over again.

I vaguely remember hearing everyone counting down to New Year’s. And I remember a waterbed. And a chicken. But what I remember with absolute clarity is the next day of epic barfing. I hacked up stuff I don’t remember eating. I threw up legos.

Eddy’s girlfriend texted me every day for a month asking “Where is the gun?”

Nelson Feldman keeps sneaking into my yard and leaving rat heads. No guts. No bodies. Just the heads.

For reasons I can’t explain, I have nightmares of drowning in a Mariachi hat.

So, that’s my story. Let it be a warning to anyone out there who is going to a New Year’s Eve party. Just say “No”. It’s not worth it. The shame and embarrassment are terrible, but they are nothing compared to never knowing what happened to your eyebrows.