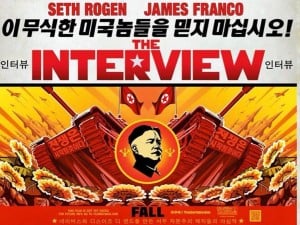 Sony Pictures’ “The Interview,” the Seth Rogen comedy that sparked a cyber attack linked to North Korea and threats of violence in theaters, filled cinemas in a limited Christmas Day release across the U.S. without incident.

The film opened in more than 300 locations after becoming available for rent and purchase at Google Play and other websites, according to Sony Corp.’s Culver City based entertainment division. Estimates for ticket sales won’t be available until tomorrow morning, Jean Guerin, a spokeswoman, said in an e-mail.

The fictional account of a plot to kill North Korean leader Kim Jong Un became a First Amendment rallying cry when voices from President Barack Obama to the Republican National Committee criticized Sony for canceling the debut. The film has become the rare big-budget movie released simultaneously in theaters and online, and it tests the longheld show-business maxim that there’s no such thing as bad publicity.

“We didn’t like the fact that someone wanted to tell us we couldn’t see a movie,” said Brian Story, 41, who went with friends to a sold-out showing at the West End Cinema in Washington. “This wouldn’t be the first movie on our list but we decided to come see it just because we could.”

While the movie’s release went without incident, the company was hit with another attack, this time by hackers who caused connection failures on its PlayStation Network as well as Microsoft Corp.’s Xbox Live. A group called Lizard Squad claimed responsibility for hacking the Internet services, which video gamers use to play online, and said it would “stop hitting” them if users called attention to the attack by retweeting its statements.

Major cinema chains dropped “The Interview” after the ‘Guardians of Peace’ hacker group invoked Sept. 11 in threats of attacks on theaters that show the film. Sony then canceled today’s planned debut, before reversing course this week when independent theaters offered to screen the picture.

“There is something to exercising one’s right to see even silly films without being intimidated by anyone,” said Joel Snyder, 61, who also attended the showing in Washington.

Ricki Kanter, 58, said she bought tickets for the movie as soon as they went on sale. Showings of “The Interview” at the West End are also sold out tomorrow and Saturday, according to the theater’s website.

“It’s my way of taking a stand that I’m not going to be intimidated by terrorists,” Kanter said.

After announcing on Dec. 23 that “The Interview” would play in a select number of independent theaters, Sony said it would also be made available online. Consumers can find it at Google Play, YouTube Videos and other websites at a price of $5.99 to rent or $14.99 to buy.

“It was essential for our studio to release this movie, especially given the assault upon our business and our employees by those who wanted to stop free speech,” Sony Pictures Chief Executive Officer Michael Lynton said in a statement yesterday.

Reviewers haven’t been kind. Patrick Clark labeled the film “stupid” in Bloomberg Businessweek and said the questions raised by the cyber attack on Sony give “The Interview” heft that the movie doesn’t deserve.

“It’s fascinating stuff, and well worth the $5.99 it cost to stream ‘The Interview.’ Even if the actual movie plays less like a climax and more like the outtakes that filmmakers sometimes roll after the credits,” Clark wrote.

The studio spent an estimated $80 million making and marketing the film, according to Wade Holden, an analyst at Kagan Research.

Sony Pictures is unlikely to recoup its costs given the limited theatrical distribution and the revenue from downloads, which must be shared with distributors, according to Eric Wold, an analyst at B. Riley & Co. in San Francisco.