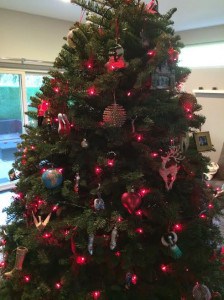 It seems like years since I’ve been here, at home, for Christmas. I usually travel at this time of year, or attend a dance camp. I got hit with wanderlust last year at this time and, for no reason other than I felt like it might be the last time, I whisked both sons off to Europe for a week. It was a great trip, but I swore off ever going to Europe again at year-end due to the abundance of closed attractions. I don’t do Japan at year-end either anymore; the Christmas closures of Europe turn into New Year’s closures in Japan. Parts south of the equator are actually the best places to be at the end of a Gregorian year, but you pay for that dearly. In any case, I’m home, right here in Culver City, all dressed up, with no place to go.

Every year is different, because of the day of the week that the holiday falls. Oddly, through my years in the travel business, profits were made and broken based on exactly how the holidays worked out on the calendar, but I realized this more recently, as I began to experience winter break as a consumer. This year, the holidays fell “well,” in that they are right in the middle of the week, surrounded by full weekends on either end and in between. This yields maximum time off in just two weeks.

One year, I was dating a Catholic, and I insisted on going to midnight mass at the Our Lady of the Angels cathedral in downtown LA. It was festive and properly religious; everything it’s cracked up to be, and I’d do it again if and when I have another Catholic in my life to schlep downtown with me, that is, someone who isn’t interested instead in schlepping me to a different cathedral. I have, in fact, been so clueless about what one does in Los Angeles on Christmas Eve, that I did not know about the LA County holiday extravaganza which happens across the street from the cathedral at the Music Center, for free, every year. This year, I was even supposed to have participated in an Israeli dance flash mob that entertained the crowd outside – so appropriate for me, Israeli dancing at “my” Music Center plaza. Friends tried to coordinate going there with me and everything…what a perfect day it would have been…if I hadn’t been ill most of the day. Something to calendar for next year, I guess.

The fact of the matter is that I didn’t ever commit to firm plans for the 24th this year, because I didn’t ever get a clear read on when my eldest son would be coming home from his school perch in San Francisco. As some parental readers may identify, I am not yet through the entire letting go process, with one son who turned 18 on the last day before winter break, and the other who is already 20 and away at college in his third year! Here’s what I’ve learned: you can’t make plans with ’em, yet you can’t make plans without ’em either. If you go ahead and make plans without them, you can get guilt-tripped big time, or not see them at all. Just saying, if you are like me, it’s one kind of trip or another…

I didn’t know when my older son would be coming home until about thirty minutes before his arrival on Tuesday, the 23rd. I decided on the spot to make an impromptu family (and sons’ friends) gathering for last night of Hanukah, older son’s return home, and younger son’s 18th birthday. We feted with homemade Japanese o-nigiri, latkes and chocolate. So, the day after, which was Christmas Eve day transformed into a day of quiet, clean up, rest and recuperation. I’d been feeling poorly since Monday – evidenced by my postponing a partner for a Monday dance session, which rarely if ever happens with me. The day ended with me tagging along with my sister and brother-in-law to a fancy- schmancy dinner out at a Venetian restaurant located in, of all places: Venice, followed by meeting back up with my sons for the de-rigueur Jewish observance of Christmas: a movie. We appropriately saw the de-Jewified, de-miracled, badly-cast, “Exodus,” a remake of “The Ten Commandments” or the animated “The Prince of Egypt” not to be confused with “Exodus” by Leon Uris, the story of the birth of Israel.

Now, it’s actually Christmas Day. I am experiencing the culmination of the December build-up, which includes: gift buying, gift giving, gift thinking, gift anticipation, not to mention holiday decorations, holiday music, holiday food, holiday gatherings. For the first time, I am at house where the people actually grew up with a traditional Christmas. The tree is decorated with ornaments from travels and experiences. Although symbolic of a Christian holiday, I can totally relate to the ritual of taking out this paraphernalia and festooning a live tree. The process is totally pleasant and enviable. This was the first year I actually noticed people driving with trees atop their cars, although, I imagine, taking down lights and ornaments and disposing of the tree is not as pleasant.

I arrived after the crack of dawn opening of presents ritual, one I have never actually witnessed first-hand. The rest of the day seems to be about eating and drinking and listening to holiday music; I understand it as a reason to have a party with family and friends. I am questioning how this is different than Thanksgiving, and one answer I come up with is its religious aspect. Both holidays do seem to be an effort at getting dressed up and being on best behavior. It all just gets me in the mood for Seinfeld’s “Festivus, for the rest of us” described as an annual airing of grievances. According to my sister, “every day is Festivus with you.”