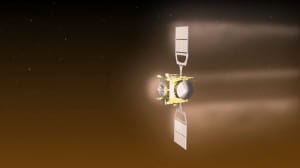 The European Space Agency’s Venus Express has ended its eight-year mission after far exceeding its planned life. The spacecraft exhausted its propellant during a series of thruster burns to raise its orbit following the low-altitude aerobraking earlier this year.

Since its arrival at Venus in 2006, Venus Express had been on an elliptical 24-hour orbit, traveling 66,000 km above the south pole at its furthest point and to within 200 km over the north pole on its closest approach, conducting a detailed study of the planet and its atmosphere.

However, after eight years in orbit and with propellant for its propulsion system running low, Venus Express was tasked in mid-2014 with a daring aerobraking campaign, during which it dipped progressively lower into the atmosphere on its closest approaches to the planet.

Normally, the spacecraft would perform routine thruster burns to ensure that it did not come too close to Venus and risk being lost in the atmosphere. But this unique adventure was aimed at achieving the opposite, namely reducing the altitude and allowing an exploration of previously uncharted regions of the atmosphere.

“During its mission at Venus, the spacecraft provided a comprehensive study of the planet’s ionosphere and atmosphere, and has enabled us to draw important conclusions about its surface,” says Håkan Svedhem, ESA’s Venus Express project scientist.

Venus has a surface temperature of over 450°C, far hotter than a normal kitchen oven, and its atmosphere is an extremely dense, choking mixture of noxious gases.

One highlight from the mission is the tantalizing hint that the planet may well be still geologically active today. One study found numerous lava flows that must have been created no more than 2.5 million years ago—just yesterday on geological timescales—and possibly even much less than that.

Indeed, measurements of sulfur dioxide in the upper atmosphere have shown large variations over the course of the mission. Although peculiarities in the atmospheric circulation may produce a similar result, it is the most convincing argument to date of active volcanism.

Even though the conditions on the surface of Venus are extremely inhospitable today, a survey of the amount of hydrogen and deuterium in the atmosphere suggests that Venus once had a lot of water in the atmosphere, which is now mostly gone, and possibly even oceans of water like the Earth.

Studies of the planet’s ‘super-rotating’ atmosphere—it whips around the planet in only four Earth-days, much faster than the 243 days the planet takes to complete one rotation about its axis—also turned up some intriguing surprises. When studying the winds, by tracking clouds in images, average wind speeds were found to have increased from roughly 300 km/h to 400 km/h over a period of six Earth years.

At the same time, a separate study found that the rotation of the planet had slowed by 6.5 minutes since NASA’s Magellan measured it before completing its five-year mission at Venus 20 years ago. However, it remains unknown if there is a direct relationship between the increasing wind speeds and the slowing rotation.

HOW TO SEE VENUS. Venus is just coming back into view in our evening sky, after spending several months as a “morning star.” It first became visible soon after sunset in mid-December, just 4 degrees above the southwest horizon, and is steadily gaining elevation each night. By January 6, it will be 9 degrees above the horizon in mid-twilight. And you can continue to enjoy Venus as an “evening star” in the western sky for the next several months.