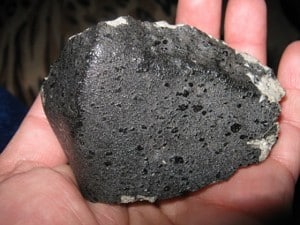 Did Mars ever have life? Does it still? A meteorite from Mars has reignited the old debate. An international team that includes scientists from Ecole Polytechnique de Lausanne (EPFL, Switzerland) has published a paper in the scientific journal Meteoritics and Planetary Sciences, showing that Martian life is more probable than previously thought.

“So far, there is no other theory that we find more compelling,” says Philippe Gillet, director of EPFL’s Earth and Planetary Sciences Laboratory. He and his colleagues from China, Japan and Germany performed a detailed analysis of organic carbon traces from a Martian meteorite, and have concluded that they have a very probable biological origin. The scientists argue that carbon could have been deposited into the fissures of the rock when it was still on Mars by the infiltration of fluid that was rich in organic matter.

Ejected from Mars after an asteroid crashed on its surface, the meteorite, named Tissint, fell on the Moroccan desert on July 18, 2011, in view of several eyewitnesses. Upon examination, the alien rock was found to have small fissures that were filled with carbon-containing matter. Several research teams have already shown that this component is organic in nature. But they are still debating where the carbon came from.

Chemical, microscopic and isotope analysis of the carbon material led the researchers to several possible explanations of its origin. They established characteristics that unequivocally excluded a terrestrial origin, and showed that the carbon content was deposited in the Tissint’s fissures before it left Mars. 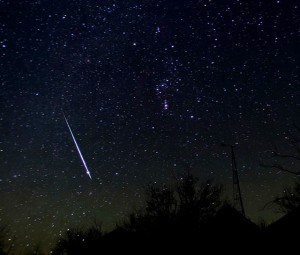 nights, Dec. 13 and 14, keep a lookout high overhead for the “shooting stars” of the Geminid meteor shower. “The Geminids are usually one of the two best meteor showers of the year,” says Alan MacRobert, senior editor at Sky & Telescope magazine. “They’re sometimes more impressive than the better-known Perseids of August.”

Under a clear, dark sky, you might see a shooting star every minute or two from 10 p.m. local time until dawn on these two nights. If you live under the artificial skyglow of light pollution the numbers will be reduced, but the brightest meteors will still shine through.

To watch for meteors, you need no equipment other than your eyes. Find a dark spot with an open view of the sky and no glary lights nearby. Geminids can appear anywhere in the sky, so the best direction to watch is wherever your sky is darkest, probably straight up. If you trace each meteor’s direction of flight backward far enough across the sky, you’ll find that this imaginary line crosses a spot in the constellation Gemini near the stars Castor and Pollux. Gemini is low in the eastern sky during late evening.

The Geminid meteors are created by tiny bits of rocky debris (mostly the size of sand grains to peas) shed from a small asteroid named 3200 Phaethon, which was discovered in 1983. Before then no one knew the source of the Geminid shower. Phaethon is small, only about 3 miles across, and it loops around the Sun every 1.4 years in an orbit that approaches the Sun closer than any other known asteroid.

Over the centuries bits of Phaethon have spread all along the asteroid’s orbit to form a sparse, moving “river of rubble” that Earth passes through in mid-December each year. The particles are traveling 22 miles per second (79,000 mph) with respect to Earth at the place in space where we encounter them. So when one of them dives into Earth’s upper atmosphere, about 50 to 80 miles up, air friction vaporizes it in a quick, white-hot streak.