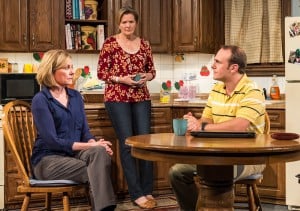 There are moments in ‘Luna Gale ‘ when I thought I knew what motivation a character had to make a choice, and then, in the next scene, I realized I had not gone deep enough – it was something else completely.

Watching the Goodman Theater production of Luna Gale at the Kirk Douglas Theater on Tuesday, Dec. 2, I was both amazed and enchanted by the power of the play. Luna Gale premiered in January of this year in Chicago, so this is only the second time this production has hit the boards. The depth and the reach of the story, the subtle and canny craft of the performers both took the audience into places they may never have suspected they were heading.

A simple but daunting premise;  a social worker must decide if she’s going to return an infant – Luna Gale – to her teenaged meth-smoking parents, or turn the baby over to her grandmother, a fundamentalist Christian who sees the world coming to an end. As soon as the action of the play begins, we think we know these people, we think we know what drives them, but no. The brilliant strategies of the playwright lead us farther from our instant biases and deeper into the insight into human need and frailty in every scene. 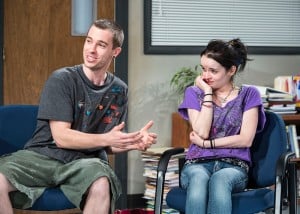 recommend this play highly enough.  The actors, every one of them, deliver achingly effective performances. Even those characters who cloak themselves in their authority and try to stay outside the battle lines have moments of openness – we are talking about a baby here, the life of an infant – where they let their hearts show through.

Naming the play after the baby girl that is the center of everyone’s attention, Rebecca Gilman has given birth to a metaphor of strength and subtlety. Everyone wants to have her, to care for her, to look longingly at her, but no one picks her up, no one feels they have the right to hold her. She is so precious, and we are so flawed.

For anyone wondering if this production should be adult fare, I’ll say no. While not for young children, teenagers will  have just as much to relate to as adults. The issues of love and sex, parenting, of responsibility, of family ties – this is a play that looks at some dark places, and shines a light.

Gliman has written a perfect play for the 21st Century in America. What we need, why we need it and how we cope with the consequences are topics too seldom discussed.